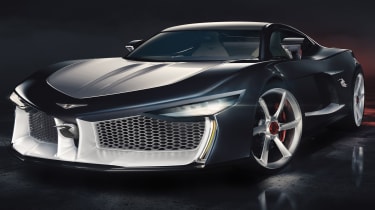 Historic Spanish coachbuilder Hispano Suiza has revealed its all-new supercar, the €2.2million Maguari HS1 GTC, ahead of its launch in spring this year.

The rear-wheel-drive, mid-engined car is said to be fitted with a 1,070bhp twin-turbocharged V10 with electric compressors that's likely to be derived from the Lamborghini Huracan’s unit. The hefty power boost means 0-62mph is taken care of in just 2.8 seconds while top speed is electronically limited to 236mph.

Named after a South American stork, the brand’s traditional emblem, the Maguari’s distinctive carbon-fibre bodywork features various stork motifs, most notably in the form of a pointy mascot above the front splitter – that appears perfect for spearing hesitant pheasants.

Despite the brand’s 100-year history, Hispano Suiza remained dormant until recently. Earlier this month the Hispano Suiza Carmen electric grand tourer was teased ahead of its reveal at Geneva, drawing influence from the firm’s 1938 Dubonnet Xenia coupe.

This has caused some dispute, however, as each of these two cars is being developed by different manufacturers, the Carmen by Hispano Suiza Cars, and the Maguari by Hispano Suiza Automobile Manufaktur AG, with both companies claiming to have rights to the historic name.

Whichever outfit ultimately turns out to be the real Hispano Suiza, the Maguari HS1 GTC is currently in the final stages of development with deliveries scheduled for the end of 2019.

What do you make of the Hispano Suiza? Let us know your thoughts in the comments...