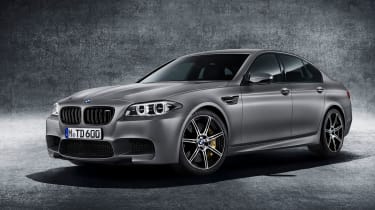 BMW is marking the 30th anniversary of the M5 with a new ‘30 Jahre’ limited edition. Compared with the standard M5, it gets a power boost of 40bhp – taking the total to 592bhp – and comes with all the chassis upgrades of a Competition Pack M5.

Only 300 are set to be built, with this particular M5 able to sprint from 0-62mph in 3.9 seconds. That’s four-tenths quicker than a standard M5 and three-tenths quicker than a Competition Pack-equipped model. Go for the optional M Driver’s Package to remove the 155mph speed limiter and you’ll be able to hit 190mph.

It’s powered by the same 4.4-litre twin-turbo V8 as any other M5 and it uses the same seven-speed dual-clutch gearbox, too. The Competition Pack chassis includes suspension lowered by 10mm, stiffer anti-roll bars and a few tweaked settings for the steering and gearbox.

There isn’t much to mark the 30 Jahre out from lesser M5s, but it’ll come in Frozen Dark Silver paint and there are some new subtle badges hidden in the wing-mounted vents. There’s more 30 Jahre badging on the kickplates and dashboard , and a '1/300' plaque nodding to this particular M5's exclusivity.

Find out more about the 30-year history of the BMW M5.