Performance upgrade makes this BMW M5 Competition Package sharper, but is it really worth the £6,700 extra? 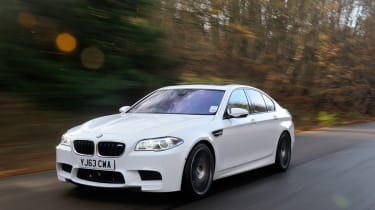 On the road, even the keenest drivers will struggle to set the BMW M5 Competition Package apart from its slightly less powerful stablemate – so, while it’s brilliant, you’re probably better off saving your money. Serious enthusiasts might prize the new-found agility – especially when it comes to track driving – but the excellent Jaguar XFR-S feels all the more extreme and it costs roughly the same.

Last time we got behind the wheel of the most powerful BMW M5 ever built, our drive was restricted to the smooth tarmac of a racing circuit. Now, though, we’ve hit the road for the first time – and in the UK, too – to find out if this £6,700 Competition Pack option is worth adding when you order your M5.

The Competition Pack ups the power of the standard 4.4-litre twin-turbo V8 by 15bhp, taking the total to 567bhp. That boost – and the car’s improved response over a wider rev range – has shaved a tenth of a second from the 0-62mph time, which falls to 4.2 seconds. In truth you won’t notice the extra performance on the road; instead you’ll come away thinking that the M5 didn’t need any more power.

Acceleration remains so brutal through the lower gears that the traction control steps in even on the driest surfaces, and throttle response is instant.

It’s the suspension and chassis tweaks that have the biggest dynamic impact. Retuned springs and dampers aim to sharpen things up, while a tweaked active diff makes the M5 feel more playful.

Add a 10mm drop in ride height, and the car seems more hard-edged than ever before. It doesn’t shrug off the worst broken road surfaces as easily as a standard model, but it does feel more eager to turn into corners.

Tinkering with the Drive Performance Control modes still adds more weight than feel to the steering. However, the gearboxis quicker, and downshifts are accompanied by a deeper growl thanks to the sportier set of pipes which, for the Competition Pack, are finished in black chrome.

The M5 is still a big and heavy car, so it’s a shame our model’s carbon ceramic brakes aren’t fitted as a part of the upgrade. The standard brakes can start to fade after heavy use, so the extra £7,295 might be a good spend for track day fans.