Koenigsegg's 1341bhp Agera RS hypercar is now homologated for US roads, will debut at Californian show 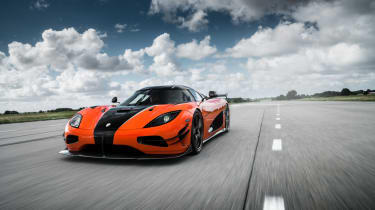 Swedish supercar maker Koenigsegg will be firing up a road-legal version of the Agera RS at this year’s Monterey Car Week. The Agera XS has an eye-watering 1,341bhp emanating from its twin-turbo V8, plus more everyday comfort features than the RS.

Despite being fully homologated for US roads, the Agera XS remains undeniably striking in a way few other road legal cars are. Koenigsegg’s shots present it with a new ‘Karosserie Orange’ finish and a carbon fibre rear wing. The latter is said to be the largest wing ever fitted to a Koenigsegg and is reminiscent of the one on the Koenigsegg One:1. 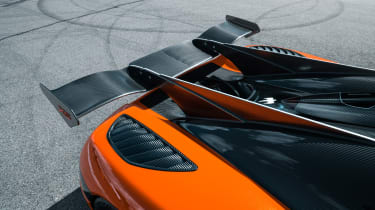 Internally the XS continues the theme with orange-stitched black Alcantara. In the transfer to road legality more comfort features are also added such as ‘smart’ airbags, climate control, Apple CarPlay, electric seats and a hydraulic lift system to get the Agera over speed bumps.

Under the bonnet sits the same 5.0-litre twin-turbo V8 as the Agera RS, producing 1,341bhp. To control this power, the XS utilises carbon ceramic brakes, active aerodynamics and adaptive dampers. The kerbweight is quoted at 1,395kg,which is slightly more than the Agera RS. The seven-speed paddleshift gearbox is unchanged from the Agera RS, though.

The XS will mark Koenigsegg’s return to the US market, which boss Christian von Koenigisegg referred to as a ‘watershed moment’ for the company.

Koenigsegg will also display the crazy Regera at Monterey Car Week. The three-motor hybrid Regera is said to be production ready, producing 1,479bhp and almost 2,000Nm of torque through a single speed transmission. Delays mean the Regera’s initial late 2016 release date will be postponed to early 2017, though Koenisegg has confirmed 80 models will be made.

Tell us what you think of the Koenigsegg Agera XS in the comments...