To combat mobile phone use while driving, Nissan has revealed the Signal Shield prototype to block incoming messages 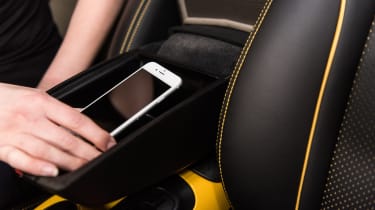 Nissan has revealed its latest weapon in the fight against distracted drivers – a prototype compartment that could be fitted in future vehicles, which it says could significantly reduce the level of distraction caused by mobile phones.

Called the Signal Shield, Nissan has showcased the concept in its Juke small crossover. The armrest compartment in the car has been lined with a Faraday cage, which blocks all incoming cellular, Bluetooth and Wi-Fi signals. If the driver pops their phone in the compartment the device is completely disconnected and hidden out of the way, eliminating any chance of mobile phone distraction at the wheel.

To achieve the same effect you could, of course, simply turn your phone off and hide it, but Nissan says the Signal Shield is designed to present drivers with a choice when they climb behind the wheel, while not having to power down devices. 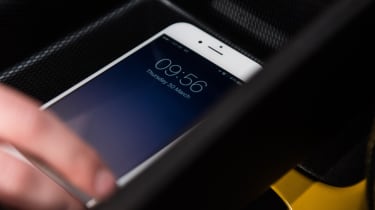 The rationale behind the Signal Shield is supported by data from the RAC, which says the number of drivers admitting to handling their phones while driving has risen from 8 per cent in 2014 to 31 per cent last year.

The problem is no longer just drivers texting and making phone calls while driving – incoming notifications are prompting motorists to glance at their phones too, if they’re within reach.

For those keen on the idea of a digital detox but even keener on listening to their own music while driving, the Signal Shield has been adapted so that wired connections through USB or auxiliary ports will still work. Nissan says that the shield can be opened easily too, so drivers can get their phones reconnected easily if needs be. The Signal Shield remains a concept idea for now, and there is currently no mooted timeframe for it appearing on Nissan’s options lists.

Is Nissan’s Signal Shield a good idea? Would you use it? Tell us in the comments section below...