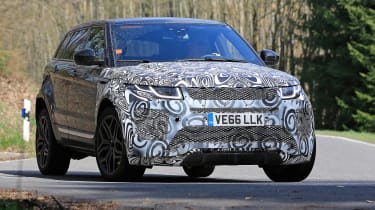 Things move quickly in the fashion conscious world of the small premium SUV, which is why we'll be seeing an all-new Range Rover Evoque late next year. The BMW X1 rival is set to grow in size, becoming more practical and better to drive while still retaining its sense of style.

The first Evoque, with interior design input from Victoria Beckham, was launched back in 2011, so it's no surprise that we're seeing prototypes for a new version. While this rolling test bed clearly uses body parts from today's SUV, an updated front-end design can be spotted, as can a wider track and raised ride height. 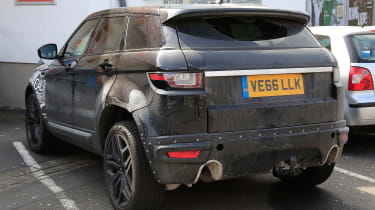 Chunkier wheelarches sit above wheels which have been pushed outwards, suggesting a wider track and an increase in size is highly likely. Expect passenger room to be more comparable to that of the X1 and rivals, while increased handling stability should be a side effect of the new dimensions.

The prototype's registration reveals it features a 2.0-litre four-cylinder diesel engine, probably of Ingenium origin. It's not clear yet whether this will be an updated version of today's unit or an all-new variation, however. We expect both petrols and diesels to be offered at launch, and will report any further details as we get them.

What do you think of the new 2019 Range Rover Evoque? Tell us in the comments...