54 years after the first Porsche 911, the German marque has reached a seven-figure milestone 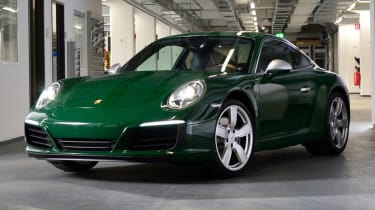 Porsche has revealed the one-millionth 911 to be built at its plant in Zuffenhausen, 54 years after the original rolled off the production line.

The one-off Porsche 911 Carrera S - commissioned by Porsche itself for display at the Porsche Museum - was treated to a number of special upgrades in honour of the extraordinary milestone.

The car was refined by bespoke personalisation department Porsche Exclusive and several special design elements allude to the very first car from 1963. Inside, the leather seats feature a pepita pattern found  on the original, while the circular dashboard instruments are finished with silver surround in a similar vein to the early models. 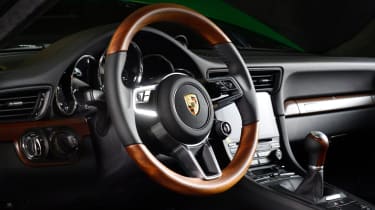 The sports steering wheel - complete with its mahogany rim - features the 1964 Porsche crest, which also takes pride of place on the bonnet.

Meanwhile a ‘1,000,000’ logo also appears inside and out - placed within the instrument cluster and on the B-pillars too. The look is completed by an ‘Irish Green’ paint job, a nod to founder Ferdinand Porsche’s son Ferry, whose first official 911 was green.

Naturally Porsche couldn’t let the occasion pass with aesthetic touches alone, therefore the engine has been tuned to deliver 445bhp. This has the effect of cutting the 0-62mph time to 4.1 seconds, with a top speed of 194mph.

Speaking at Zuffenhausen - where the 718 Boxster and 718 Cayman are also built - Porsche Chairman Dr Wolfgang Porsche said: “54 years ago, I was able to take my first trips over the Grossglockner High Alpine Road with my father. The feeling of being in a 911 is just as enjoyable now as it was then. 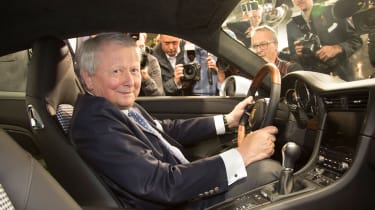 “That’s because the 911 has ensured that the core values of our brand are as visionary today as they were in the first Porsche 356/1 from 1948”.

Although this one-millionth example of the 911 will eventually settle into its display at the Porsche Museum in Stuttgart, before then it will embark on a world tour to promote the model’s longevity with stops include the Scottish Highlands, the Nurburgring, the United States and China.

Do you like the look of the one-millionth Porsche 911? Let us know in the comments section below!