The Swedish supercar manufacturer revealed its latest model at this year’s Geneva Motor Show, with a claimed maximum output of 1,578bhp 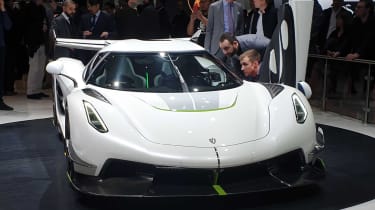 Koenigsegg has revealed its new hypercar at Geneva 2019. Called the Jesko, the machine features a carbon fibre monocoque, active aerodynamics and a range of driver convenience systems which the Swedish firm claims will make it easier to live with.

The Koenigsegg Jesko is powered by a twin-turbo 5.0-litre V8 engine capable of running on either conventional petrol or E85 ethanol fuel, with the latter fuel providing a considerable bump in power. Power figures stand at 1,262bhp and 1,578bhp for the two fuels respectively, with torque numbers peaking at 1,500Nm.

The engine takes the crown as the world’s lightest V8, tipping the scales at 189kg. It features a flat-plane crank (for a rortier engine note), a set of ceramic-coated pistons (weighing just 290g each) and an 8,500rpm redline.

Performance is fed through an all-new nine-speed multi-clutch gearbox, dubbed the “Light Speed Transmission.” Koenigsegg claims the LST is one of the lightest performance DCTs on the market, weighing a nimble 90kg including fluids. To keep the engine’s power in check, the system is also fitted with an electronic differential. 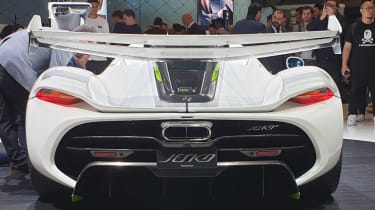 Koenigsegg claims that its new transmission can “pre-empt” the driver’s intentions, lining up the optimal gear for acceleration based on road speed and engine rpm. For the keen driver, the Swedish firm has also included a “manual” shift mode, operated by a lever in the centre console.

Underneath, the Jesko is built on an all-new carbon fibre tub, to which is bolted a set of electronically adjustable active shock absorbers, a rear-mounted horizontal damper which combats the car’s tendency to squat under hard acceleration and an active rear wheel steering system.

Like the Agera before it, the new Koenigsegg Jesko features a host of functional aerodynamics, with a new active rear wing, an active front splitter and a revised rear diffuser. The Swedish firm claims it will generate more than 1,000kg of downforce at 170mph, and a maximum downforce figure of 1,400kg.

Despite being designed for the track, Koenigsegg’s new hypercar gets a reasonably plush interior. Features include Alcantara, leather and carbon fibre trim, electrically-adjustable sports seats, a digital instrument binnacle and a nine-inch infotainment screen with support for Apple CarPlay. 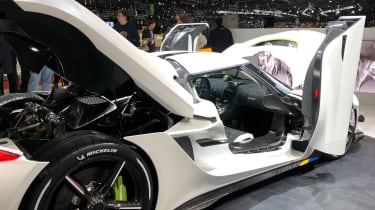 Koenigsegg also claims the Jesko will be easier to live with. The new carbon fibre monocoque is bigger than any of the brand’s previous models, allowing more interior space. Other creature comforts include a set of hydraulically-operated scissor doors and a pair of touchscreens embedded into the steering wheel, which control everything from the stereo to the ride height.

Full performance specifications and pricing information for the Koenigsegg Jesko are yet to be announced, but we’ll update you with the latest when it’s available.

What are your thoughts on the new Koenigsegg Jesko? Let us know in the comments section below…