Jaguar is going for the jugular. The all-new seventh-generation XJ is the Coventry firm's most advanced production car ever - although you'd be forgiven for thinking otherwise. As you can see, the styling is far from revolutionary, while details such as the slatted grille are deliberately designed to hark back to the original XJ of 1968. 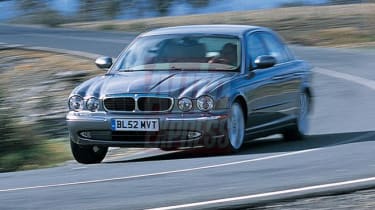 Jaguar now has a car capable of tempting owners out of rival models - which was not the case before. Well equipped and good value in the class, the XJ is a better balanced all-rounder with improved accommodation and fine driving characteristics. It also offers something different to the mainstream German marques.

Jaguar is going for the jugular. The all-new seventh-generation XJ is the Coventry firm's most advanced production car ever - although you'd be forgiven for thinking otherwise. As you can see, the styling is far from revolutionary, while details such as the slatted grille are deliberately designed to hark back to the original XJ of 1968. Take a closer look, though, and the proportions are more in keeping with those of a modern car.

The front overhang is shorter, as is the bonnet, while the windscreen is raked more steeply. Why the evolutionary approach? Simply because that's what customers told the company they wanted. But if the conservative exterior was designed not to alienate existing owners, just how does Jaguar hope to entice people into the newcomer from rival marques? The Leaping Cat needs 'conquest' sales to be a global player and fulfil its aim of selling 30,000 cars worldwide next year, 5,000 of them in the UK. The answer is by tackling criticisms of the previous model - the main one being the lack of interior space.

Taller by 134mm and with more space between the axles than the outgoing long-wheelbase model, the new car is much bigger. Which must also make it heavier, right? Wrong, because the XJ is built of aluminium. That may not sound impressive, but it's a huge undertaking and required a fresh production line, new techniques, massive investment and a fair amount of trial and error. The result is a riveted and glued monocoque that is 40 per cent lighter as well as 60 per cent stiffer than steel. But as chief programme engineer and the man in charge of the XJ project, David Scholes, said: "Buyers won't be bothered that the XJ is made of aluminium, but they will care about the many benefits this brings. The car is faster, more efficient, rides and handles better and is safer as a result of the aluminium construction."

To keep insurance costs and repair bills down, the XJ has a separate bolt-on front end to protect the main structure against serious damage.

It's easier to appreciate the work that's been done from inside, and the rear is the best place to start. Existing owners will scarcely believe the amount of leg and headroom on offer, which is now on a par with most class rivals. Even more remarkably, the boot has grown by 25 per cent to 470 litres.

Yet as with the exterior, conservative design rules inside. Wood and leather dominate, and rightly so, as plastics are not a Jaguar strong point. As for technology, the company wants it to be user-friendly. So the touch-screen sat-nav is simple, the automatic handbrake is a delight to use and the pedals are now electrically adjustable, as are the steering wheel and seats.

Four engines will be available from launch in April. The familiar 240bhp 3.0 V6, borrowed from the X-Type, is the entry-level unit and the XJ6 that uses it is likely to be the big seller. The S-Type lends two V8 powerplants, the 4.2 with 300bhp, and the supercharged version for the XJR with 400bhp. Next year, a V6 diesel is due, together with a long- wheelbase model stretched by a foot.

However, it's the new 3.5-litre unit that Jaguar is happiest with. A shorter stroke version of the 4.2, it produces 262bhp and 345Nm of torque, all delivered through a standard six-speed automatic gearbox. Weighing in at only 1,615kg, the XJ8 3.5 has plenty of punch and sounds fantastic. It's also suitably clean and efficient, returning 26.5mpg on the combined cycle.

It's an effortless cruiser and the set-up is more driver-oriented than you might expect, but without spoiling ride quality. Standard air-suspension means the XJ remains composed, although wind noise from the B-pillars takes the edge off the car's overall refinement.