You wouldn't believe it, but you can now buy an Aston Martin for the price of a Ford Mondeo. The exotic machine is stunning to look at, yet second-hand the amazing DB7 is as affordable as many family cars, and comes with far more street cred. 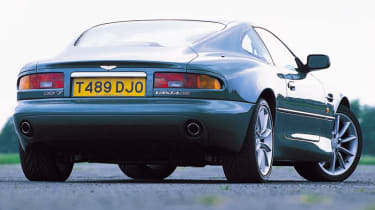 You wouldn't believe it, but you can now buy an Aston Martin for the price of a Ford Mondeo. The exotic machine is stunning to look at, yet second-hand the amazing DB7 is as affordable as many family cars, and comes with far more street cred. With acceptable, although not cheap, running costs, plus the prospect of pretending to be James Bond without the associated risk, few models at this price have so much all-round appeal. Launched back in 1994, the DB7 secured Aston's future after years of unrest. More than 4,000 six-cylinder cars were sold - a company record. Flushed with success, the firm added the lithe Volante cabrio in 1996. Then, in 1999, the original supercharged 3.2-litre engine was joined by a staggering 420bhp 6.0-litre V12. Despite the extra cost (from £92,500), it quickly superseded its smaller sibling, selling well right up to its discontinuation in 2003.Checklist * Engine: Jaguar-derived 3.2-litre engine is very tough, as is the later 6.0 V12. Even the 3.2's three-year supercharger belt-renewal stipulation is affordable. * Brakes: Hard-worked discs are susceptible to warping, revealed by a judder under braking. Source new parts from specialists rather than dealers; you'll pay around £75. * Suspension: Tyres are sensitive to pressures, and wear rapidly if incorrect. Look for problem signs on the inside edge, which indicate mis-aligned suspension geometry. * Interior: The cabin is cheapened by Ford-derived switchgear, but at least it's reliable. Ensure the air-con works, though, as the dash-out repair can cost more than £3,000. * Reliability: Early cars did suffer annoying niggles, but these were all cured over time. Our best advice? Buy as late as you can possibly afford, even if it means choosing a higher-mileage example.Driving Impressions Even the 3.2-litre DB7 has ample performance, but the V12 is truly stunning. Many prefer the automatic box to the heavy manual, yet the handling inspires confidence and suits British roads, while the ride is brilliant for a sporting model. There's reasonable room for two inside (forget the token rear 'seats', though) and the trim is plush, but the classy dash is spoiled by cheap Nineties' Ford switchgear. Look out instead; the view over the bonnet is sublime.Glass's View Continuing Aston Martin's heritage for building beautiful cars, the DB7 has seen an increase in interest following the launch of the DB9, thanks to a two-year waiting list for the newcomer. Manuals and autos are worth the same, while Volante cabriolets are seasonal and not as good to drive as the coup

Truly one of the world's most handsome cars, even the Volante's clumsy soft-top does not detract from the DB7's beauty. Inside, the Aston is immaculately finished in hide and wood. The supercharged engine has instant urge; the delicious subdued whine lets you know you're driving something very special. And while the coup