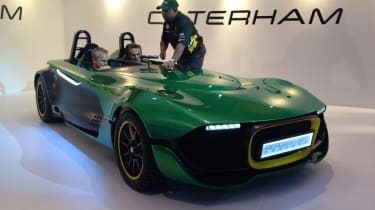 The Caterham AeroSeven concept, an extreme new open-top concept car, was revealed during free practice at the Singapore Grand Prix. The AeroSeven kicks off Caterham's ambitious expansion plans, and previews a production model due in autumn 2014 and hints at the styling direction for the all-new sports car being developed alongside the Renault Alpine, due in early 2016.

It's the company's first closed-wheel model since the Caterham 21 appeared in 1994 and uses the widened chassis from the latest Seven CSR - hence the familiar long bonnet and cabin positioned over the rear axle.

The bodywork is constructed from carbon-fibre to reduce weight and to draw a clear link to the methods and materials used by the F1 team. Providing power to the rear wheels is a 237bhp 2.0-litre Ford Duratec engine delivering its peak-power at 8,500rpm, coupled to a six-speed manual gearbox.

Weighing in at close to 650kg, that gives the AeroSeven a power to weight ratio of around 394bhp per tonne and a 0-62mph time of less than four seconds. For the first time in a Caterham a selection of electronic systems have been used to help the driver harness the power. A brand-new engine management system includes variable traction control and launch control functions, as well as a Bosch anti-lock brake system.

All the electronic aids can be fully disengaged and adjusted via controls mounted on an F1-style steering wheel, while to ram home the F1 connection there's even 'Flash-to-Pass' and 'Pit Lane Speed Limiter' switches on the wheel. A hi-resolution display, mounted centrally in the cockpit, shows information such as engine speed, gear selection and brake bias and as well as a default Race mode, a Road mode limits the revs and reduces power.

Graham Macdonald, Managing Director of Caterham Cars, said: "Over the coming years, we will be expanding our range of sportscars as we look to meet the differing needs and desires of potential customers - from the lifestyle customer to the ultimate thrill-seeker. The AeroSeven Concept is the first model in that journey."