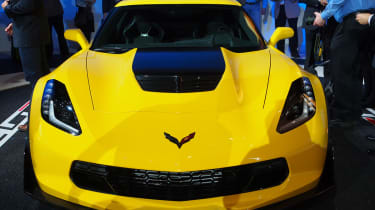 The Chevrolet Corvette Z06 – an even more powerful and aggressively styled version of the Corvette Stingray – has been officially revealed at the Detroit Motor Show.

The engine’s supercharger sits in the V of the engine block, but that only increases the height of the engine by a couple of centimetres over the Corvette Stingray’s LT1 engine. However, the addition of the supercharger boosts power considerably from the naturally aspirated 450bhp V8 in the Stingray.

Buyers will have the choice of a seven-speed manual with rev matching for smoother downshifts, or a new eight-speed torque converter automatic that has paddle shifters.

GM claims that the automatic gearbox offers shift times very similar to the best dual-clutch gearboxes offered by rivals. It says the Corvette’s gearbox will shift eight-hundredths of a second quicker than the seven-speed PDK in the Porsche 911.

The Z06 will be offered in three different aerodynamic configurations. The standard Z06 features a front splitter, spats around the front wheel openings, a unique carbon-fibre bonnet with a larger vent, and the rear spoiler from the Corvette Stingray’s Z51 Performance Package

Next is the carbon-fibre aero package - in either black or plain carbon-fibre finish - adds a carbon front splitter, carbon sills, and a larger rear spoiler.

Buyers will also be able to upgrade their Z06 with a special Z07 Performance Package that includes even more aggressive aerodynamic upgrades, Michelin Pilot Super Sport Cup tyres and Brembo carbon-ceramic brake discs. This pack makes the Z06 faster on a track than the outgoing top-spec Corvette ZR1, according to GM.

Talking about the car, president of General Motors North America, Mark Reuss, said “The new Z06 delivers levels of performance, technology and design that rival the most exotic supercars in the world.”

“And the Z06 leverages the engineering expertise of GM, offering the choice of two world-class transmissions, supercar performance without supercar fuel consumption and technologies that make it easier to fully enjoy the incredible experience of driving it.”

Like the £61,495 Corvette Stingray, the Z06 is expected to go on sale in the UK from later this year, but in left-hand drive only. 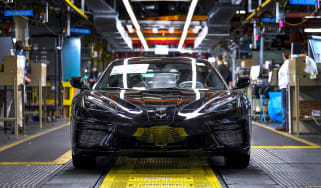 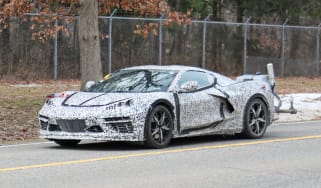