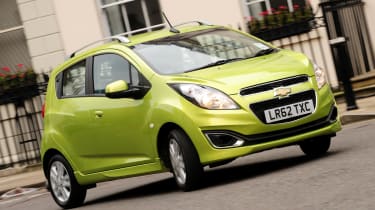 The Chevrolet Spark is the smallest car that the company offers, and rivals other small city cars like the Toyota Aygo, Citroen C1 and Volkswagen up!. The Spark has value for money on its side, with the top-spec LTZ coming with plenty of equipment. The two engines, a 1.0-litre and a 1.2-litre petrol, offer sub-par emissions and fuel economy compared to more recently launched rivals. However, the Spark does get some zero per cent finance deals and is cheap to insure. A recent update saw some trim improvements and a simplified centre console, but the LS and LT base models only come with steel wheels and feel very sparse – and that’s just not up to the standards of its rivals.

There's a choice of two engines available in the Chevrolet Spark, a 1.0-litre unit with 68bhp or a 1.2-litre one with 80bhp. WIth a 0-62mph time of 15.5 seconds, the lower-powered model not only looks slow on paper, but it feels really sluggish on the road as well. The 1.2-litre engine is a bit better, especially for people who make regular motorway journeys: its 0-62mph time is 12.1 seconds, and it's undoubtedly a bit faster in normal driving as well. It's not nearly as powerful as it really ought to be, however, and both engines end up feeling slow and struggle at higher speeds. There’s no Chevrolet Spark automatic either, which means you have to work hard to keep pace with traffic. The Spark drives much like most other city cars, which means the light controls are very easy to use and its low kerbweight makes it agile through narrow city streets – but the driving position is too high, and the rear seats are far too cramped. Rivals like the VW up! and Toyota Aygo beat it for driving enjoyment, with numb steering and excessive body roll meaning the Spark lags behind - and the ride at low speed is jittery at best. On the motorway the engine becomes very noisy and strained and there's loads of wind and road noise at speed as well.

Both the larger 1.2-litre and the smaller 1.0-litre petrol engines in the Spark get the same economy figures, so the only deciding factor between them is the list price and insurance costs. Both engines get 56.5mpg and CO2 emissions of 118g/km, but compare that to other city cars like the Volkswagen up! or the Citroen C1 though and it doesn't sound quite as good, with all those models claiming versions with under 100g/km of CO2. Chevrolet do offer the Spark with zero per cent finance and no deposit over a five-year period along with an extended warranty, which may tempt some buyers but it won't match the fuel consumption figures of its main rivals. For young drivers the Spark might be worth a look, thanks to low insurance costs, which are often a major factor when buying a new car.

Thanks to a chunky mini-MPV-style design the Chevrolet Spark is certainly a quirky looking city car . The large swept-back headlights and hidden rear door handles only add to that. It’s certainly something different – even if not everyone will appreciate the looks. The new, updated Chevrolet Spark launched in 2012 features a new dual-port grille, tweaked headlights and a sporty new bumper as well. Top-spec LTZ models get 15-inch alloy wheels as well, and you can buy the car with extra paint options to help it stand out from the crowd. The main feature of the interior is a motorbike-style pod mounted above the steering wheel, which holds the speedometer. The Spark also gets some soft blue backlights for the air-conditioning and stereo switches – though it looks quite smart, the interior just feels cheap next to something like the VW up!.

The Chevrolet Spark may look like a mini-MPV, with its high driving position and roof rails on some models – but it’s far from being as practical as a car like that. With the three rear seats in place there's a meagre 170 litres of boot space, but you can carry longer items by simply folding them flat. Cupholders, storage places and a glovebox can all be found in the cabin, so there's plenty of room to store all your bits and bobs. Plus, most buyers will be aware that buying such a small city car means compromising on practicality. Carrying five adults will always be a bit of a struggle as space in the rear seats is limited and head and legroom are both at a serious premium. The middle seat is particularly bad, and definitely won't seat an adult comfortably, while the shape of the interior also means passengers in all of the rear seats will be rubbing shoulders - both with each other and the sides of the car.

Chevrolet came in at 20th place out of 32 in the 2013 Driver Power customer satisfaction survey, beating Citroen and Peugeot, makers of the C1 and 107 – the Spark’s rival cars. The Chevrolet Spark received four out of five stars when it was tested for crash safety by Euro NCAP despite having six airbags as standard. Some city cars do manage to achieve the full five stars in this test but it's not easy for cars this size to do so. All models now get stability control as standard, however. Mechanical problems so far have been few and far between but some pieces of the interior feel like they would break quite easily. Just like with so many aspects of this car, it's comprehensively beaten by better-built rivals like the Skoda Citigo and VW up!, which scored the full five stars in the safety tests. However, all Chevrolet models get a five-year or 100,000-mile warranty and fixed-price servicing, so buying a new model should keep costs down. 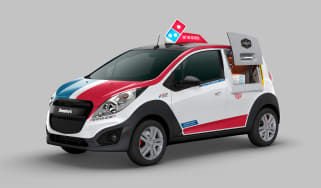 US pizza firm creates custom Chevrolet Spark-based delivery car, which can keep up to 80 pizzas hot at a time
Chevrolet Spark LTZ 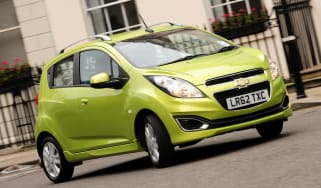 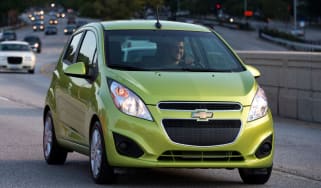 Our verdict on the revised Chevrolet Spark, which gets a better cabin and more grown-up look
Chevy Spark vs rivals 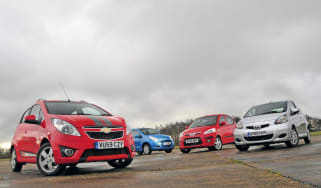 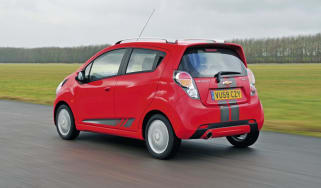 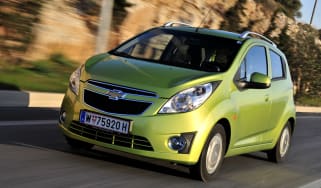 Our verdict on replacement for Matiz city car.
Skip to HeaderSkip to Content