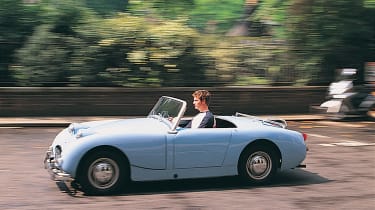 Few cars look quite as happy as the Austin-Healey Frogeye Sprite, and thanks to its hugely lovable nature – owning one has been known to give any owner an equally large grin! On modern roads the Sprite looks absolutely tiny too, adding to its almost toy-like appearance.

While it’s fundamentally the same car as the later MG Midget, the Frogeye Sprite offers a unique character that is simply charming, not to mention a whole lot more distinctive. While values are higher, the Sprite remains a very strong proposition for the DIY enthusiast – which means it’s actually one of the cheapest classic cars to run and maintain.

Then of course there’s the fun that can be found sitting behind the wheel. This is not by any means the ultimate performance machine, but it’s low, lightweight and extremely direct. Its small size also makes brilliant on the UK’s smaller back lanes that can often feel too narrow in anything more moderna and powerful.

While the history of the model is interesting, you can thank the penny pinching at parent company BMC for its most distinguishing feature. Those headlights were originally meant to fold backwards into the bonnet when not in use (much like a Porsche 928) but during its development it was decided the system would be too expensive. This, and other cost-cutting measures meant that it was incredibly cheap in its day, but subsequent versions of the Sprite (featuring completely revised styling and a larger, heavier body) lacked the desirability of the original.

As many as 49,000 were produced, around a quarter of which were right-hand drive. Numbers have reduced since, though as classics go it's still fairly accessible – around 1000 MkI sprites are still present in the UK alone.

Over the Frogeye's three year life, very little changed in terms of performance and spec. However, many buyers have since tweaked the original formula either for cosmetic reasons or to update the driving experience.

The most common modifications are centred around the engine. The standard 948cc A Series lump produced a tiny 43bhp – many buyers considered it underpowered even back in the fifties, leaving many searching for improvement. The simplest upgrade is to fit the larger carburettors from the MkII Sprite which liberates 3-4bhp, but slightly more comprehensive steps gain much greater performance.

Engine swaps are common, with various later and more powerful versions of the A Series fitting easily under the bonnet. Often lifted from the MG Midget or MKIV Sprite, the 1275cc unit offers 65bhp and 72lb ft, boosting acceleration significantly. Due to the sheer number produced, the 1098cc lump is often used, too.

Though neither disc brakes or wire wheels were available at launch, both are frequently poached from either the Midget or later Sprites. The brake disc upgrade is certainly a desirable feature – particularly if the engine has been upgraded. With the Sprite often used by motorsport enthusiasts back in the sixties, one of the most common weight saving measures was to replace the standard steel front clamshell for a fiberglass part.

It’s worth remembering that the Sprite is tiny by modern standards – anyone over six foot tall will struggle to fit inside the cabin. The boot is only accessible from behind the seats – to improve rigidity (and reduce development costs) there is no bootlid.

There were eight paint options available during the Sprite’s life, though not all of them at the same time. The most desirable shades now are Old English White (which remained throughout the full duration of production) and Iris Blue.

• Check for rust pretty much everywhere, but particularly on the sills, the floor and around the suspension mounting points. The Sprite’s advanced monocoque construction, the first mass-produced British car to feature this, does make repairs more difficult than its more simple rivals.

• A lot of the the car’s potential value is in the body shell, so a thorough inspection is a must. An easy way to tell the general health of the body is to look carefully at the car’s panel gaps. Uneven gaps can mean that there are structural issues hiding beneath.

• If you can get the car on a ramp, a thorough inspection of the underneath would be extremely beneficial. One key area is the rear spring holder, which is quite difficult to repair.

• Be cautious of thick underseal. This could be a sign of a fastidious owner, but it could also be hiding flaking paint and serious corrosion.

• Rust usually started attacking the Sprite just a few years after it was built, so almost all will have undergone restoration at some point. Inspect the quality of the workmanship, as a poor paint job could spell trouble in the near future.

• Make sure that the bonnet, doors, and boot all open, close and generally feel positive when used. The large and relatively heavy front clamshell puts a lot of strain on the hinges, so check that these are in good shape.

• The Sprite is soon approaching its 60th birthday, so it isn't too surprising to see cars with worn or tired-looking interiors. Fortunately, both replacement and aftermarket parts are abundant and reasonably priced – a trim set including door cards, carpets and dashboard panel costs barely more than £150. The same applies to replacement hoods and seats.

• Thankfully, there is very little in the way of trim to worry about on the Sprite, but check for condition of the chrome grille, windscreen surround and front bumper (if fitted)

• Under the bonnet there shouldn’t be much cause for concern. The A Series engine is a doddle to work on, with cheap parts and endless online resources and specialists offering help if anything goes wrong.

• To check the general health of the engine, look at the condition of the oil, coolant and other fluids. Oil leaks come with the territory, but anything excessive should be cause for concern. Keep an eye on the oil pressure when the car is both cold and warm.

May 1958: Unveiled to the press in Monte Carlo, just prior to that season’s Monaco Grand Prix. Prices started at £669

1961: MkI was replaced by the MkII, which brought significant styling changes, ending the Frogeye’s production run

• www.midgetandspriteclub.com – Large owners’ club for the Sprite and Midget

• www.austinhealeyclub.com – Owners’ club for the full Austin Healey range, including the Sprite

With a decent number of Sprites still in existence, there tends to be a reasonable amount of choice on the market at any one time. Prices vary wildly from rolling shells at about £7000 to near-mint examples with engine and brake upgrades for £25,000. Clean, completely original models are now hard to come by. When they become available, prices range from £12,000-£18,000 for good examples, and a little more for the best.