Although the Falken Ziex ZE310 Ecorun handled well in the dry, rolling resistance let it down 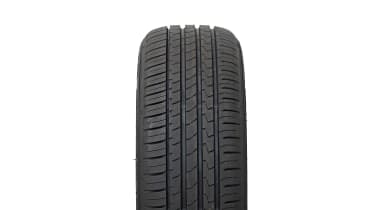 Falken starred in last year’s SUV tyre test, where it came close to securing a first victory. But that was with the FK510 SUV, and the ZE310 we’re testing here had a much harder time this year.

Just as with the Pirelli (above), a joint ninth finish actually represents only small deficits across the majority of tests. The Falken was happiest in the deep water of the aquaplaning tests, where it took two podiums. It was only a few percentage points behind the best in tests where performance gaps are usually large.

It was less effective in the shallower depths of the wet handling and braking tests. It was just shy of two metres off the best in braking, but was a bit of a handful on the handling track. Initial turn-in was good, but grip dropped off as the lock increased. That initially strong grip meant care was needed to keep the rear in line, and made consistent lap times tricky. It ended up 1.5 seconds off the pace.

That good initial grip was there in the dry, too. It lacked the sporty feel of the Continental but it hung on well and was good on the throttle, with limited tyre slip building up on long curves. It was close to the best in the wet and dry but, like the P7, fuel economy dropped it down the results.

“Not a high-selling tyre for us. However, those customers who have ordered a set have left good reviews, with strong grip in various conditions being singled out for praise.”