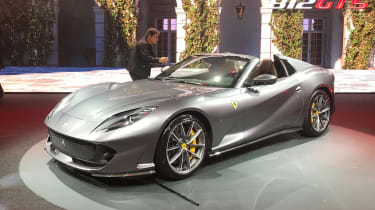 This is the new Ferrari 812 GTS. It’s a convertible version of the 812 Superfast which marks the 50th anniversary of Ferrari’s first V12-engined convertible model – the famed 1969 Ferrari 365 GTS4 Daytona Spider.

Like the 812 Superfast, the 812 GTS is powered by a naturally aspirated 6.5-litre V12, which sends its power to the rear wheels via a seven-speed dual-clutch automatic. Power and torque figures stand at 789bhp and 718Nm respectively, with Ferrari claiming a top speed of 211mph, 0–62mph time of “less than three seconds” and a 0–124mph time of 8.3 seconds.

The 812 GTS is fitted with a folding hardtop, which Ferrari says can be lowered in just 14 seconds at speeds of up to 45km/h (29mph). There’s also a retractable electric rear screen between car’s buttresses, which acts as a windbreaker when the roof is lowered. Drivers can also open the screen with the hardtop in place. 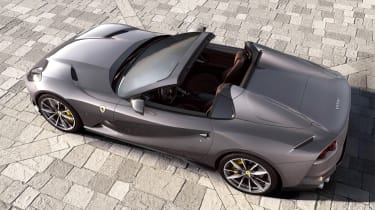 Ferrari has also given the 812 GTS a minor aerodynamic overhaul, in an effort to maintain the same performance as the 812 Superfast. A new triplane wing and active vane features in the car’s rear diffuser to maximise downforce, while fresh air vents on the 812 GTS’s rear flanks help reduce drag by relieving excess pressure from the car’s rear wheel arches.

The Italian brand has also recalibrated the 812 GTS’s adaptive dampers, to compensate for the car’s 75kg weight-gain over the 812 Superfast. A revised six-into-one exhaust system also features, along with shorter gearbox ratios and a reworked traction control system.

Like the 812 Superfast, buyers will be able to choose from a range of exterior and interior customisation options. A new multi-spoke alloy wheel design is also available in a choice of three coatings, with customers given the option of “diamond-finish,” “liquid silver” and “Grigio Scuro.”

What do you make of the new Ferrari 812 GTS? Let us know in the comments section below…