A replacement for the Ferrari F12, the 812 Superfast goes straight into the brand’s hall of fame as an all-time great 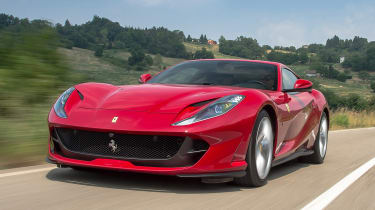 How do you improve on perfection? Nobody in the Auto Express office has ever returned from a drive in the F12 Berlinetta craving more power or a more visceral experience. And yet, here we are with the Ferrari 812 Superfast: the most powerful and fastest road-going V12 Ferrari (with the exception of the hybrid LaFerrari) ever built.

Superfast by name, super fast by nature, then? Whatever your thoughts on the slightly dubious name, there’s no denying this Ferrari is more than able to live up to its moniker.

It is, of course, a replacement for the old F12 Berlinetta, which at the time was the fastest and most powerful car to emerge from Maranello. A case of history repeating itself and evidence that the front-engined, rear-wheel drive Ferrari V12 is alive and kicking, despite rumours to the contrary. 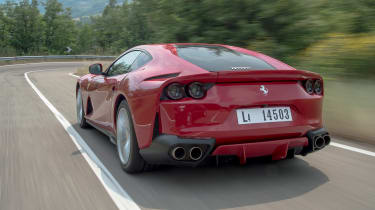 The 812 Superfast is, if you like, Ferrari’s way of celebrating its 70th anniversary. Unsurprisingly, nothing was left to chance in the development of this latest masterpiece.

Prices start from a little over £250,000, but this will increase once you’ve finished playing with the online configurator.

Forget Superfast; we’re running out of superlatives for Ferrari’s latest range-topper. The 812 Superfast replaced the F12 in 2017 and is astonishingly quick. It remains comfortable enough to be enjoyed on most roads, but isn't the most practical proposition.

Somehow, Ferrari has managed to squeeze even more power from an enlarged 6.5-litre V12 engine, while the seven-speed dual clutch transmission is arguably the best we have ever experienced. The 812 is an almost faultless supercar, but not quite as good a long-distance proposition as the Aston Martin DBS Superleggera.

More power, more torque, more pace and more comfort: this is the Ferrari V12 cranked up to eleven

The Ferrari 812 Superfast sits at the top of the Italian supercar manufacturer's range of production cars. It's a hard-edged super GT car aimed at the likes of the Aston Martin DBS Superleggera and, to a lesser extent, the Lamborghini Aventador S. It shares some of its basic architecture with the previous Ferrari F12 Berlinetta, but boasts more power, less weight and even more dramatic styling.

Ferrari would like us to think of the 812 Superfast as an entirely new car – not a replacement for the old Ferrari F12 – and it’s not hard to see why. Nothing has been left to chance in the pursuit of perfection. So much so that it’s difficult to know where to start.

The 75-per-cent-new V12 motor will grab the headlines – and rightly so – but the engine is merely one part of a supremely effective package. For a start, the 812 Superfast is 60kg lighter than the F12, which makes a huge amount of difference in the real world – especially when paired with the extra horsepower.

Ferrari has also reworked the seven-speed dual clutch transmission to provide 30 per cent quicker upshifts, and 40 per cent faster downshifts. Merely statistics, you might say, but we’d go as far as saying the 812 Superfast changes gear better than any other road car in history.

Other changes include the torque-variable electric power steering – a first for Ferrari – along with the rear-wheel steering, a new electronic differential, a revised traction control setup and a development of Ferrari’s Side Slip Control.

Combine this arsenal with the new active and passive aerodynamics systems, and you have the makings of an absolute weapon. You need a circuit to be able to enjoy the full breadth of its talents – we spent an hour on Ferrari’s Fiorano test track – but there’s no disguising the fact that the 812 Superfast was developed primarily for the road.

On the pockmarked roads around Maranello, the sense of occasion is overwhelming and a little terrifying. First, there’s the cost of the thing – attempting to get the best from a £250k supercar when sharing the tarmac with Italy’s notoriously erratic drivers is not something you take lightly.

At 4,657mm in length and 1,971mm in width, the 812 Superfast is longer and nearly as wide as a Land Rover Discovery, but a Disco doesn’t have 789 horses attempting to gallop out of the rear wheels. And yet, within minutes, you feel at ease, such is the sophistication of the driving experience. 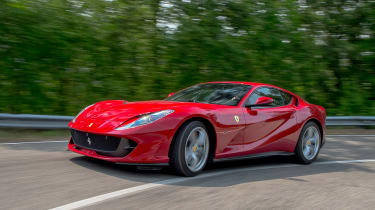 Assuming you can live with the thirst, this is a Ferrari you could use every day. It’s so usable – from the soothing suspension to the phenomenal traction. Floor the throttle and the 812 will provide limpet-like levels of grip, right up to the 8,900rpm limiter. Of course, turn the traction control off and it’ll slip and skid as you wish.

With such a tech-fest, there’s a danger that the technology can work against you, but in the 812 that’s simply not the case. Everything behaves impeccably, from the brakes to the electric power steering. And yet it rides on relatively conventional Pirelli P-Zero tyres. This truly is a remarkable machine and one that Ferrari will be hard pressed to beat.

The numbers are staggering, especially for an engine first seen in the Enzo back in 2002. The V12 has grown to 6.5 litres and delivers 789bhp and 718Nm. Crucially, peak power sits at 8,500rpm – a mere 400rpm short of the redline – while full torque is delivered at 7,000rpm. It’s an engine that begs to be revved, although only the brave will avoid short-shifting when driving an 812 for the first time.

The 0-62mph time of 2.9 seconds and top speed of 211mph are figures guaranteed to make the 812 a must-have card in a game of Top Trumps, but the killer statistic lies elsewhere. The Ferrari 812 Superfast will sprint to 124mph (200kmh) in just 7.9 seconds – about the same time a MINI Cooper will hit 62mph.

If running costs are important to you, then you’d best steer clear of the Ferrari 812 Superfast

If you’ve spent a quarter of million pounds on a V12-engined Ferrari, you’re unlikely to care too much about fuel economy or how much it will cost to tax. But, just in case, here are the numbers.

The 812 Superfast will, if you’re careful with your right foot, return as much as 18.9mpg on a combined cycle, making the most of that vast 92-litre fuel tank. As for the VED, with CO2 emissions of 340g/km, the tax man will come at you hard.

At the time of writing, the Ferrari 812 Superfast hasn’t been given an insurance rating, but it will more than likely sit in the highest group 50, alongside other high-powered supercars. Again, we doubt the cost of insurance will be too much of a concern.

In 2016, we revealed that the Ferrari 458 is the slowest depreciating car in Britain, retaining 93.5 per cent of its value after three years and 30,000 miles. With a higher list price, the 812 will fall further, but we still expect the V12 supercar to hold its value well. 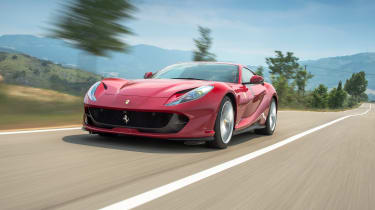 A brilliant driver-focused cabin, although the passenger won’t be feeling left out

If there are any doubts about the 812 Superfast, they concern the styling. Some will love it, while others might find it a little fussy and a tad over-styled. It’s all subjective, of course, and there’s a sense that everything has been done with the aim of improving airflow and cooling, along with maximising downforce.

It’s clearly an evolution of the F12 Berlinetta, with a smattering of the F12tdf thrown in for good measure. You can decide whether or not this is a good thing.

Obviously, the cabin has been designed with the driver in mind, but all cars also get a digital display that sits in front of the passenger. If nothing else, it provides some entertainment to ensure the driver doesn’t have all of the fun. 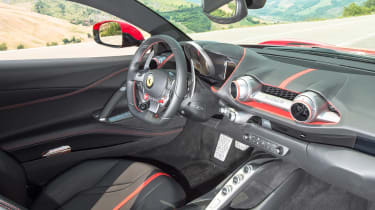 The link to F1 is clear, with the majority of functions accessible via the steering wheel. The red Manettino switch, for example, is used to select the different driving modes, while the settings for the suspension, lights, indicators, wipers and cruise control are all selected via the wheel.

In reality, Ferrari supplies the digital dashboard, leather seats and carpets, and it’s left to you – or possibly your bank manager – to decide how crazy you want to go with the huge list of options.

Almost everything is up for grabs, from the colour and materials to the contrasting stitching. If the excellent standard seats aren’t good enough, they can be exchanged for carbon fibre or Daytona racing versions.

The tachometer, which sits within the new multi-adjustable digital dashboard, is available in six colours, including yellow and red.

The dual-cockpit feature – inherited from the Ferrari GTC4 Lusso – adds a display above the glovebox, relaying navigation, drive mode and entertainment info to the passenger. Ferrari was also one of the first manufacturers to offer Apple CarPlay, so phone connectivity shouldn’t be a problem either.

A surprisingly practical supercar that can be used daily, assuming you can live with the size (and cost) associated with running one

The 812 Superfast has been designed for road use first, track use second, which means it offers GT levels of practicality. Sure, it’s best suited to a weekend away – and you’ll have the leave the children with the nanny – but a pair of admittedly slim door bins provide a nod to practicality.

To criticise the standard seats for being a touch firm might sound like nitpicking, but it’s worth pointing out.

There’s no getting away from it, the 812 Superfast is a big car. At 1,971mm wide and 4,657mm long, it’s not a car you’ll want to thread through a city street without breathing in.

Even the tallest of drivers and passengers will have little problem finding a comfortable position in the 812 Superfast. At 1,276mm high, however, it’s a low-slung machine - meaning you need the skills of a contortionist to squeeze yourself into this particular supercar. 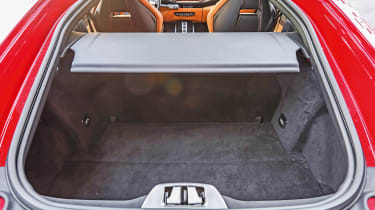 Technically, the 812 Superfast is a hatchback, meaning it isn’t quite the impractical supercar you might expect. The boot lid opens to reveal at least 320 litres of space, depending on how you spec it. Naturally, you can accessorise your 812 with rear shelf leather bags, a suit carrier or a golf bag.

Unproven at this stage, but the 812 Superfast is loaded with technology to keep you safe

The 812 Superfast will not be subjected to the Euro NCAP crash safety test, but there’s enough technical wizardry to keep you out of trouble. Just don’t come crying to Ferrari if you flick the Manettino switch to ‘CT OFF’ and decide to go it alone.

Ferrari claims that the Brembo Extreme Design brakes – seen previously on the LaFerrari – are the most efficient it has ever developed. At 62mph, the 812 will come to a stop in 32 metres, which is a 5.8 per cent improvement compared to the F12.

As for reliability, the low-stressed V12 has been around long enough for Ferrari to iron out any issues, while the 812 Superfast is covered by an extremely good maintenance plan.

The 812 Superfast is built in very small numbers and so did not feature in our Driver Power 2019 customer satisfaction survey. 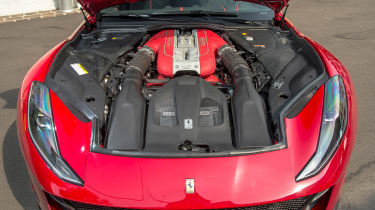 The coverage for the extension lasts for 12 months and can be renewed annually for three years.

The 812 Superfast will also come with a complimentary scheduled maintenance plan for the first seven years of its life. This delivers peace of mind and could save tens of thousands of pounds in maintenance bills. 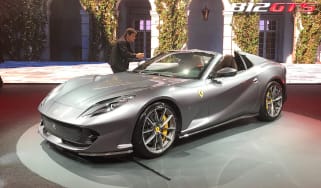 The new Ferrari 812 GTS is a convertible version of the 812 Superfast, boasting the same 6.5-litre V12 with 789bhp
New Ferrari SP3JC ride review 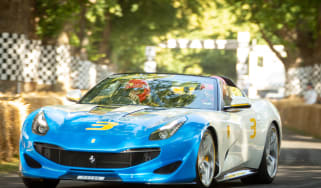 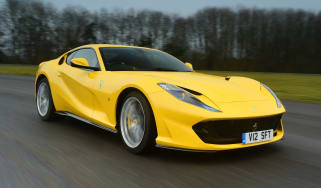 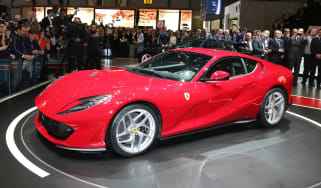 New front-engined Ferrari 812 Superfast gets 20bhp more than F12tdf, and a top speed in excess of 211mph
Skip to HeaderSkip to Content