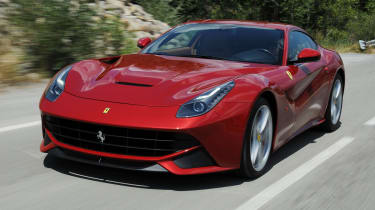 The Ferrari F12 Berlinetta is as close to motoring Nirvana as you can get. It's powered by a development of the FF’s 6.3-litre V12 engine, which is tuned to produce a crazy 730bhp. The F12 is designed to be more comfortable and useable everyday than the mid-engined 458 Italia, but is just as explosive in a straight line and almost as agile in the corners. The design isn’t just for show either, as scoops and vents channel the airflow around the car to keep drag to a minimum and maximise downforce, without resorting to a huge rear wing.

With 730 rampaging Italian horsepower being sent to the rear wheels, you would imagine that - like the 599 GTB - the F12 is quite a handful to drive. In reality it’s remarkably friendly, though, with a smooth linear power delivery and predictable handling when the rear tyres do break traction. The steering is absolutely pin-sharp, translating even the smallest movements into an instant change of direction, and while it can’t match the 458’s all-round agility, a lower centre of gravity than the 599 ensures it stays remarkably flat and composed in corners allowing you to maintain astonishing speeds. A V12 Ferrari wouldn’t be complete without a bellowing exhaust note, and the F12 delivers with a howling soundtrack that encourages you to hold onto gears and let the sound intensity reach its crescendo.

Clearly, this isn’t going to be the F12’s strong suit, but then who buys a Ferrari with an eye on cutting costs? Having said that, Ferrari have worked hard to make it as efficient as possible, adding stop-start and improving the combustion process to cut the 599’s fuel economy by 30 per cent – but average fuel economy of 18.8mpg will still hit your wallet hard, and you can expect that figure to tumble when you up the pace. Repair bills and servicing will be astronomical, as well as wear and tear items like brake pads and tyres. Luckily Ferrari now offers a free seven-year servicing deal, which covers all scheduled maintenance of the car, regardless of mileage.

Whereas the 599 GTB was a challenging shape from some angles, the Pininfarina-designed F12 Berlinetta is an instant classic thanks to its blend of sharp edges and sensual flowing lines. Similarities with the FF are obvious, especially at the front, but the aluminium skin is entirely new. Compared to the 599, the F12 is 20mm narrower, 50mm shorter and has a 30mm shorter wheelbase – and it’s visibly more compact in the flesh. The interior is swathed in leather and Alcantara, and trimmed in modern finishes such as aluminium and carbon-fibre. However, the layout, which does without a central display screen and groups the majority of the controls onto the steering wheel, can be confusing and fiddly to use.

Just like fuel economy, practicality will never be that impressive in a Ferrari – even the four-seater FF has its limitations as a family car. There are positives, though. The F12 has a 350-litre boot, which can be expanded to 500 litres if you remove the rear divider (that’s roughly the same as a Volkswagen Golf Estate). Both the driver and passenger have plenty of space, too, and the suspension is forgiving enough to easily tackle cross-continent trips. A 90-litre fuel tank means you won’t have to stop too often either – brim it and you should be able to cover 370 miles between fill-ups.

Gone are the days when Ferraris were brittle, temperamental machines. Modern Ferraris are beautifully engineered and are packed with all the latest safety equipment, while the build quality is top-notch. There have been no major recalls for the F12 or FF (which shares a similar engine) and the superb twin-clutch gearbox has proved robust so far, despite the punishment it receives from that colossal engine. Standard fit ceramic brakes provide immense stopping power and excellent resistance to fade, while the lack of a folding hard top like the California, or a four-wheel drive system like the FF, means there’s far less to go wrong. 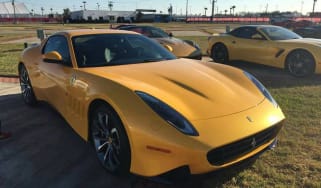 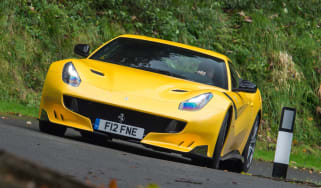 We drive the thrilling 769bhp Ferrari F12tdf, and find it's one of the most extreme GT cars ever made
Ferrari F12tdf: the F12 Berlinetta gone bonkers 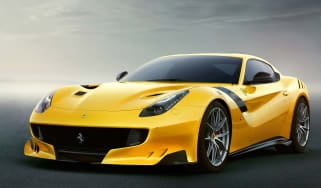 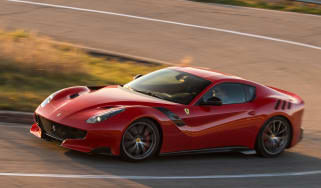 The new Ferrari F12tdf is sold out but it's nevertheless a very, very special car - with an incredible V12 in the front.
New Ferrari F12 Speciale spotted: More pictures 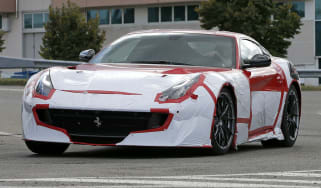 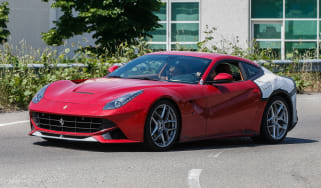 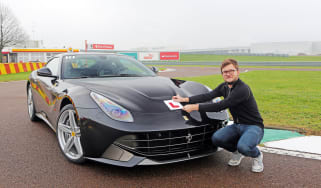 Learning to drive a supercar 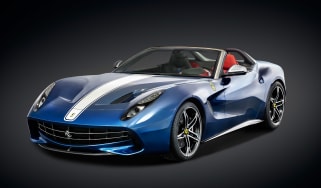 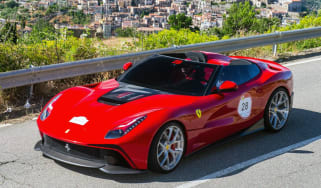 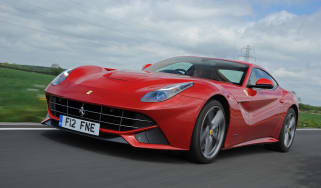 We test the Ferrari F12 Berlinetta on UK roads for the first time. It’s dramatic, but is it brilliant?
Ferrari F12 prices 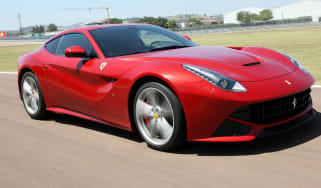 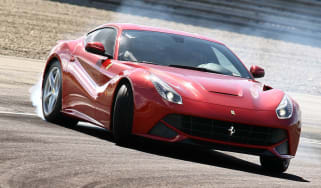 We get behind the wheel of the all-new 730bhp Ferrari F12 Berlinetta, ahead of its launch next year
Skip to HeaderSkip to Content