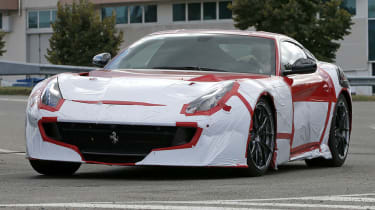 Update - rumours of the Ferrari F12 Speciale were true to a point. Ferrari chose to name the car F12tdf and you can get full official details here.

Ferrari's F12 is certainly no slouch, but that's not stopping engineers at Maranello creating a hardcore Speciale version. Previously snapped from afar with no disguise, another one has been seen with light wrapping out on the roads.

Like the 458 Speciale, the stripped out F12 will be faster, lighter and even sharper to drive than the standard car. It is expected to use an uprated version of the existing naturally aspirated V12 – boosting power from 731bhp to more than 760bhp. 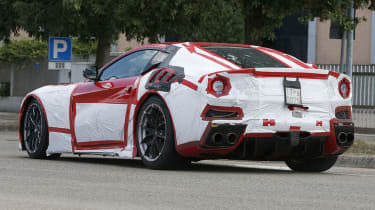 That should ensure the more powerful F12 sprints from 0-62mph in less than three seconds and hits more than 215mph flat out. The current car does 0-62mph in 3.1 seconds and will do 211mph in top gear.

In terms of styling, the F12 Speciale gets all the usual lightweight touches, with carbon fibre body panels and vents on the front and rear wings. There also looks to be a slightly larger spoiler and more aggressively designed rear diffuser. The Speciale appears to have inherieated the 458’s black bar across the back, while the F1-style central foglight remains.

• Updated Ferrari F12 'M' to get extra power and tech

The 458 Speciale tipped the scales at 90kg less than the standard model, so we can expect a similar weight loss for the race-focused F12. Lightweight bucket seats and a carbon fibre interior will ensure the Speciale is as light as possible. 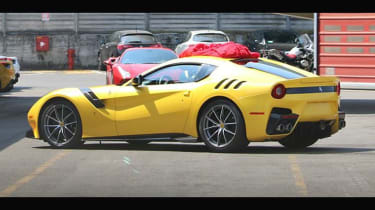