Our Ferrari 458 Speciale review, the most extreme road-going Ferrari yet 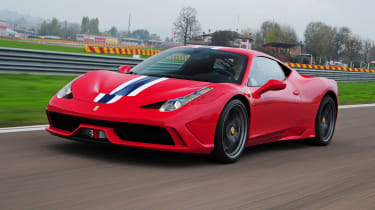 At £208,000, the Ferrari 458 Speciale costs around £30,000 more than the standard car. So is it worth it? If you’re looking for one of the most memorable driving experiences around, the answer is a huge yes. With its V8 howl, pulverising performance, top handling and racing heritage, the Speciale is one of the greatest performance cars you can buy.

You don’t need to speak Italian to know that the new Ferrari 458 Speciale is going to be, well, a bit special. Based on the brilliant 458 Italia, it’s F1 tech and promises to be the most thrilling machine in an already high-octane line-up.

On paper, the Speciale is mouth-watering. Power from the 4.5-litre V8 is up from 562bhp to 597bhp, weight is slashed by 90kg and the 0-62mph figure tumbles by four tenths to 3.0 seconds. And the stunning bodywork has been given an equally aggressive overhaul.

At the front you’ll find an F1-style chin spoiler, a pair of turning vanes ahead of the front wheels and a resculpted bonnet. Look down the Ferrari’s flanks and you’ll spot shark-like fins, while at the rear is a larger spoiler, a huge diffuser and two menacing-looking tailpipes. The Speciale also benefits from clever active aerodynamics, which use hidden flaps to increase downforce or decrease drag, depending on the car’s speed.

Inside, there are plenty of race-inspired touches. Carbon fibre and Alcantara trim are used throughout, while the driver and passenger benefit from a pair of lightweight, figure-hugging Sabelt seats. Elsewhere, it’s standard 458, which means slick design, a driver-focused dash and bold LCD instruments.

Prod the steering wheel-mounted starter button and the V8 yelps into life before settling into a gravelly idle. And performance is explosive – the Speciale feels almost as fast as the 730bhp Ferrari F12 flagship.

This impression is heightened by the seven-speed twin-clutch transmission. Tweaks to the software means it responds even more promptly to the gearshift paddles, allowing you to rip through ratios in a blink.Adding to the drama is the engine’s glorious soundtrack, which turns from sharp bark to spine-tingling yowl as the rev counter whips round to the 9,000rpm redline.

The V8 dominates so much that it’s easy to overlook the sublime handling. A combination of uprated aerodynamics, tweaks to the adaptive dampers and specially developed Michelin tyres helps the Speciale generate a staggering 1.33g during hard cornering. In fact, there’s so much grip in the dry you’ll run out of bravery before the car starts to slide. Even so, Ferrari’s new Side Slip Angle Control systems allows a little playfulness before the stability control steps in.

As with the standard car, the steering is razor-sharp and direct, allowing you to place the car with laser-guided accuracy, while the modified Brembo brakes deliver eye-popping stopping power. Yet what’s really remarkable is the 458’s ability to combine this raw, racing-car driving experience with everyday usability. The ride is firm but never uncomfortable, the major controls are light and visibility is excellent. There’s even a handy 230-litre boot.

For an in-depth buyer's guide on the Ferrari 458 from Classic and Performance Car click here...