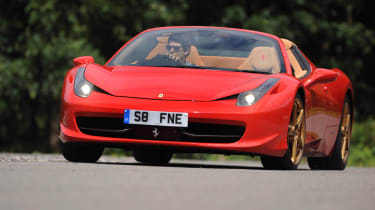 Ferrari says that the 458 Spider will be its most popular model, accounting for a third of global sales – and it’s not hard to see why. The convertible is just as good to drive as the 458 Italia coupé, with the bonus of a drop-top roof that lets you hear every note of that amazing 4.5-litre V8. How will it shape up against the new McLaren 12C Spider, though? We can’t wait to find out.

There aren’t many better ways to stir your soul than in an open-top Ferrari. And now the new 458 Spider joins illustrious predecessors such as the Dino 246 GTS and 308 GTS.

Packing a retractable aluminium hard-top, the newcomer doesn’t require many compromises over the 458 Italia coupe. The roof folds electrically in a mere 14 seconds, and it even features a central glass wind deflector so that the V8’s tremendous note can enter the cabin when the weather isn’t quite so sunny. About the only negative is the fact the Italia’s see-through engine cover hasn’t been carried over – something on which McLaren’s new 12C Spider manages to trump its arch-rival.

But whereas that British-built contender has been criticised for lacking soul, the 458 Spider oozes charisma from every component. Dropping the roof is pure theatre: it flips backwards in only 14 seconds (three seconds quicker than the McLaren’s), slotting under a panel that rises up ahead of the Ferrari’s engine cover.

Top up or down, the 458 Spider looks simply sensational – and it sounds it, too. The 562bhp 4.5-litre V8 emits a fabulous bark at anything over 3,000rpm, which then turns into a racing car-like howl at the insane 9,000rpm red line.

The seven-speed dual-clutch gearbox rifles through the ratios effortlessly, with every pull of the right paddle barely interrupting acceleration. For the record, the Spider can sprint from 0-62mph in 3.4 seconds, a mere tenth slower than the Italia, while the top speed drops from 202mph to 198mph – differences that are so tiny you’ll never notice them on the road. If you do, you might want to think about a career as an RAF test pilot...

Likewise, additional chassis strengthening might make the 458 Spider 50kg heavier than the coupé, but the car darts into corners just as quickly and grips just as hard – plus stops in eye-poppingly short distances thanks to carbon-ceramic brakes.

Yes, there is a tiny amount of wobble through the interior mirror over bumpy surfaces, but the newcomer is nearly as stiff – and as quiet with the roof in place – as its stablemate. The steering-mounted manettino switch gives a variety of driving modes. Turn everything off and this feels every inch the monstrous supercar. Yet Sport mode allows you to cruise comfortably – and with a deep front boot and room behind the seats for golf clubs, the car is surprisingly practical.