We take to the track in the Ferrari 458 Challenge Evoluzione race car. How does it compare to the road-going version? 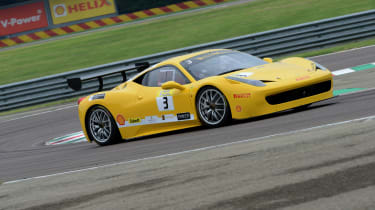 Driving the Challenge Evoluzione is a great way to understand the real link between Ferrari’s road and racing cars. Stiffer suspension, slick tyres and race track aerodynamics are matched to the standard car's excellent gearbox and engine, to create a fantastic track car that can be enjoyed by drivers of all levels of experience. Ferrari was founded on the principles of customer racing and that’s as true today as it was in 1947.

Born as a racing car manufacturer that made road cars to pay the bills, Ferrari has never forgotten its illustrious sporting heritage. Today, alongside Formula One, the firm produces an unrivalled range of racing cars for customer motorsport. The entry point to which is the 458 Challenge.

Built to contest one-make Ferrari Challenge competitions – which the firm has run since 1993 and currently organises European, US and the Asian Pacific championships – the 458 Challenge was introduced in 2011. Recently updated for 2014 in the shape of the Challenge Evoluzione, we got to sample it at the hallowed ground of Ferrari’s famous Fiorano test track.

Based on the 458 Italia, the Challenge uses the same 562bhp 4.5-litre V8 engine, which is left unaltered and in the same state of tune. It’s matched to the road car’s seven-speed dual-clutch gearbox, although here the ratios have been altered to deliver better torque delivery at lower revs. 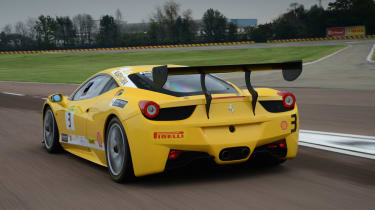 The Challenge is also the only 458 racing car to use the road car’s E-Diff – as the GT3 and GTE Endurance racing versions use a bespoke racing gearbox and drivetrain.

However, while the engine and gearbox are carried over from the road-legal 458, don’t be fooled into thinking the Challenge isn’t a proper racer. The most obvious visual clue to its intent is the large rear wing that debuted on the 2014 Evoluzione model. In conjunction with under body aerodynamics and a new front splitter it helps generate lots of downforce, while keen Ferrari fans will also spot the Challenge’s wider front grille, which aids cooling.

Sitting 50mm lower than the road car; the Challenge’s stiffer springs and single-rate dampers give the suspension a much firmer set-up, while centre-nut competition wheels are matched to Pirelli slick racing tyres. 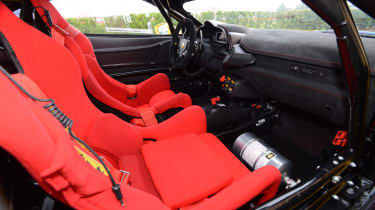 Opening the feather-light composite door is a giveaway to the Challenge’s focus on weight saving via the use carbon panels and polycarbonate side-windows. Although, thanks to the addition of racing kit like the roll-over cage, competition fuel tank and quick-lift air jacks, the Challenge is just 10kg lighter than the 458 Italia road car.

Designed for gentleman drivers rather than professional racers the Challenge retains ABS and traction control and from behind the wheel the familiar 458 driver focused dash is unaltered. The racing wheel features a three-stage manettino controller that offers two-track optimised traction control calibrations and a fully off setting.

Thanks to retaining an adjustable steering column and sliding seat, it’s easy to get comfortable, while at low-speed, it’s as simple to drive as any other 458.

Although, the recalibrated throttle and gearbox map make the accelerator pedal far more sensitive. With lovely downshift blips and rapid full throttle up shifts, the gearbox works just as well as the road car. Even better, the cabin is devoid of all its sound deadening, so you’re treated to an even more vocal V8 soundtrack. 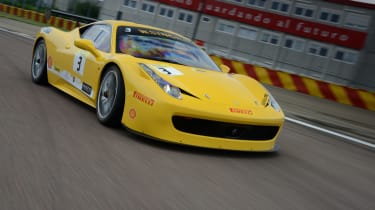 Work hard to get heat into the slick tyres and the Challenge starts to come alive, giving you ever-increasing confidence in the levels of grip on offer. As with 458 road cars, the steering is light and fast, but the Challenge’s race suspension gives the slick tyre a flat footprint on the road, which combined with the racing rubber’s lack of sidewall movement, adds even more precision to the turn-in and steering.

In low-speed corners the extra grip takes away a little of the playfulness of the road car, but traction is excellent – good enough that you’ll soon switch off the traction control.

However, it’s in the faster corners and braking zones that the Challenge really stands clear of the road car. The Brembo carbon ceramic brakes deliver massive stopping power, while the grip of the slick tyre and the reduced pitch sensitivity of the lower ride height and stiff suspension, allow you to attack the brake zones - hitting the pedal harder and later than in the road car. By using the aero, you can bleed the speed off with the confidence of the race optimised ABS.

The grip of the slicks, the taut suspension and the invisible grip generation by the aerodynamics ensures the Challenge corners flat - gripping through high-speed corners beyond the point at which the road car’s tyres start to slide and fight against the change of direction.

Lap after lap, the Challenge gives you the confidence to brake later, pick up the throttle earlier and carry more speed. The Challenge reacts quicker than the road car, it rewards precision and commitment, but at the same time, it communicates the limit of grip pretty well, too, and never feels overly intimidating. 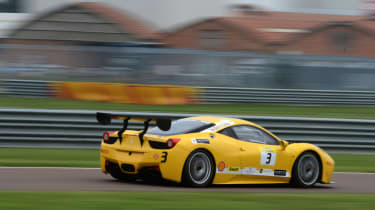 With a smart racing dash ahead of the wheel, lap times and all the important data right is displayed right in front of you, and there’s even air conditioning, although on a hot day the cabin is still sweltering. Not that you’ll notice it too much, such is the intoxicating experience of driving the Challenge. Sadly, all too quickly our time with it was over, but it’s given us a real insight into the meeting point between Ferrari’s road and racecars.

And if you want to see the 458 Challenge in action the European Series is coming to Silverstone this weekend, as part of the Ferrari Racing Days extravaganza on the 13 and 14th of September.

A grid of 36 458’s will take part in a pair of 30-minute races, while other track action includes displays of the incredible FXX and 599XX Corsa Clienti cars, plus host of owners driving a range of old Formula One Ferraris as part of the unique F1 Clienti programme. If you’re a Ferrari fan head along for a weekend of all things Prancing Horse.

Read our review of the Ferrari 458 Italia here...