We drive the new 458 Spider. It looks set to become Ferrari's best-selling model and it's easy to see why… 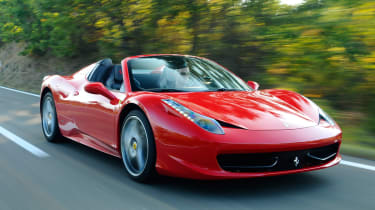 Ferrari was aiming to deliver a convertible version of the 458 Italia with no compromises and from what we’ve experienced, it’s mission accomplished. Handling is as sharp as ever, straight-line speed is blistering and with no roof between you and the howling 4.5-litre V8 it feels even more pure than the hard-top. If you can ignore the £25,000 premium over the coupe – and many spending £170,000 on a car can – then we can’t think of a single reason why you wouldn’t want the Spider.

The Ferrari 458 Spider is set to be the Italian supercar maker’s best-selling model, expected to account for a third of worldwide sales. With expectations that high it can’t afford to disappoint.
And first impressions are good - designed around a fully retractable aluminium hard top the Spider looks just as good as the 458 Italia coupe with the roof up. About the only negative is the roof mechanism robs it of the Coupe’s wonderful see-through engine cover. But with sharp buttresses and a delicately designed rear end, it’s a stunning thing.
Video: watch Owen Mildenhall drive the new Ferrari 458 Spider
[[{"type":"media","view_mode":"content_narrow","fid":"68780","attributes":{"alt":"","class":"media-image"}}]]
But it’s the attractions of open-air motoring that really make this Ferrari such a tantalising prospect and the Spider doesn’t take long to transform. The roof flips backwards – just like the ultra-rare 575M Superamerica – in just 14 seconds, slotting underneath a panel that rises up ahead of the engine cover.
Once stowed the clever mechanism hides in the bulge ahead of the engine and doesn’t compromise aerodynamics or performance. In fact the buttresses are designed to channel air towards the grilles in the downward sloping engine cover. Not only that, the two-piece aluminium roof is 25kg lighter than a traditional fabric hood while the clever packaging provides enough space for a luggage bench behind the seats.
The Spider comes with an electric wind deflector – effectively a glass screen that rises up between the buttresses – and it’s very effective at reducing buffeting. On the open road wind roar is well isolated from the cabin. But there are some noises you want to hear and with the roof down the soundtrack delivered by the 458’s sensational 562bhp 4.5-litre V8 engine can be savoured with even more passion than in the coupe.
In fact such is the importance that Ferrari attaches to this aural treat that it has retuned the triple exhausts to maximise the fabulous bark. And it makes a terrific noise – a hard-edged howl that can’t fail to put a smile on your face. The good part is that if the weather isn’t so sunny, you can drop the glass screen when the roof is in place, allowing the engine noise to still enter the cabin.
Yet purists will argue that taking the roof off reduces rigidity and increases weight, diminishing its capabilities. The 458 Spider is 50kg heavier thanks to chassis strengthening – but the V8 is so devastatingly powerful, the increase barely registers. The Spider hurtles from 0-62mph in 3.4 seconds, just a tenth slower than the Italia, while few people will be disappointed by the top speed dropping from 202mph to 198mph.
A far more important question to answer is whether the Spider has retained the pin-sharp handling the Italia is famed for. And without a doubt, it has. The steering has the same sharp steering reactions as the coupe and the whole car changes direction with the same enthusiasm, darting into corners and gripping hard. Only over very broken surfaces is there the hint of some wobble through the windscreen pillars.
The sensational dual clutch gearbox delivers seamless upshifts and a glorious blip on the downshifts; the ceramic brakes provide incredible stopping power, while with the steering wheel-mounted manettino switched into its raciest setting race mode, the Ferrari can be balanced beautifully with the throttle on the exit of corners.
The constant stream of feedback through the controls means delicate steering adjustments help you place the car precisely in the corners. Yet for all the scintillating performance and tactile handling, the Spider’s composed ride means it’s a capable cruiser, too.
It’s also efficient. Ferrari’s HELE High Emotion Low Emission stop start system is available as a £980 option in the UK and drops CO2 emissions from 307g/km to 275g/km – given the performance on offer, that’s impressive.  There’s no doubt the 458 Spider is an astonishingly capable and involving supercar.
Priced at £198,856 it commands a considerable £25,675 premium over the coupe, but it’s certainly worth it. Ferrari predicts the UK will be one of the Spider’s biggest markets, with 60 per cent of buyers opting for the drop-top over the Italia. After driving it’s easy to see why.
Share this on TwitterShare this on FacebookEmail