The Ferrari FF is the first car from the Italians to use four-wheel drive, and it also gets four seats, a large boot and a 651bhp V12 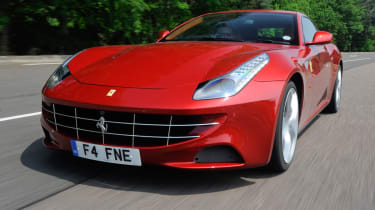 The Ferrari FF is the replacement for the 612 Scaglietti, and sits at the top of the maker's range. With four-wheel drive and four seats, it rivals super saloons like the Porsche Panamera Turbo and Aston Martin Rapide. The engine is a mighty 651bhp 6.3-litre V12 that produces scorching pace and a thunderous sound, while the gearbox is a development of the seven-speed twin-clutch unit from the 458 Italia. The shooting brake styling won’t be to everyone’s taste, but it means there’s a generous boot to go along with the razor-sharp handling and impressive long-distance refinement.

The innovative four-wheel-drive system sends maximum power to the rear tyres until it senses them beginning to slip. At that point, a separate gearbox mounted at the front of the engine sends power to the front. You can feel the front tyres tugging at the steering wheel and digging into the road in tight corners, but the steering is still sharp and accurate. The V12 engine dominates the experience with its gorgeous array of sounds and ferocious pace, while the double-clutch gearbox offers quick, seamless shifts. Throw the FF around and there’s a tiny bit more body roll than a 458 Italia, but the pay off is a smooth ride and refinement almost on a par with the Porsche Panamera.

The FF’s fuel consumption and running costs are not for the faint-hearted - Ferrari claims economy of 18.3mpg, and that’s with an optional stop-start system fitted. While that might be possible to achieve on a long-distance run, deploy a fraction of the V12’s potential and consumption can easily dip into single figures. To help ease the pain, Ferrari is offering seven years free servicing on all new cars, although with tyres costing £1,700 a set you can expect to encounter plenty of other bills along the way.

You have to admire Ferrari for taking a risk with the FF’s design – its predecessor, the 612 Scaglietti, was a far more conventional looking four-seater GT. In the flesh the FF is an imposing looking car due to its sheer size, but it still looks sporty despite the bulk. On the inside the fit and finish is excellent, while splashes of body-coloured trim raise the excitement. But with so many buttons on the wheel and spread around the cabin, the layout can be confusing at times.

It’s hardly a Mercedes E-Class Estate, but the FF is Ferrari’s most practical model ever. You can forget off-roading, but the four-wheel drive system offers some vital grip when the weather takes a turn. The two individual rear seats are big enough to accommodate full-size adults, but there’s not much space to spare, making them more suited to children on trips of an hour or more. Thanks to that elongated roofline, the boot is a good size too, offering 450 litres of space, or 800 litres with the rear seats folded down.

The FF hasn’t undergone Euro NCAP crash testing, but is does have driver and passenger airbags, as well as a sophisticated ESP system controlled via the Manettino switch on the steering wheel. A small number of FF’s were recalled in the Chinese market due to a small problem with the oil lubrication system, but so far it has an excellent reliability record. 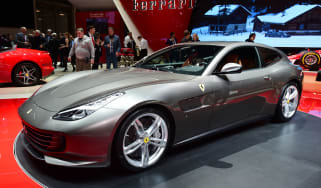 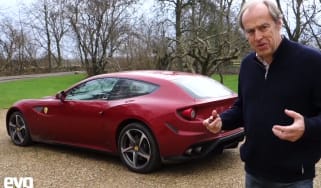 Two weeks with a Ferrari FF 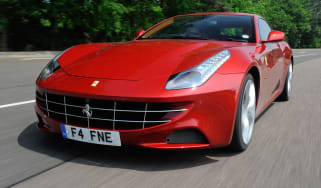 Practical, four-wheel-drive four-seater is a departure for Ferrari, so does it still have the Maranello magic?
Ferrari FF 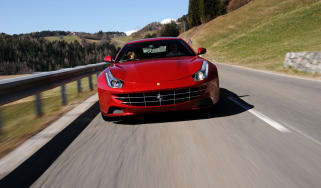 Auto Express is first to try Ferrari's new four-wheel drive FF supercar. It's a revolution, but is it any good?
Skip to HeaderSkip to Content