Auto Express is first to try Ferrari's new four-wheel drive FF supercar. It's a revolution, but is it any good? 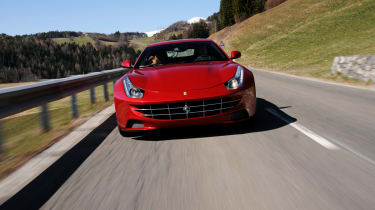 Ferrari engineers have worked long and hard to deliver a unique solution to improving the speed, stability and safety of the company's flagship GT car, and it shows. On the road, this car is every bit as thrilling as its specification suggests it should be. The age old adage “Race on Sunday, sell on Monday” might not quite fit with this car's mission to combine the appeal of a continet crossing GT with the driver appeal of a mid engined coupé, but it's just as apt here as it is for the company's 458 Italia.

As revolutions go, the FF is a complete reinvention of everything that Ferrari stands for. For starters, there's the name. FF stands for Ferrari Four, which refers to the four-seater cabin and four-wheel-drive running gear.

OK, so Ferrari has built four-seaters before – such as the 612 Scaglietti, which the FF replaces – it’s built front-engined GT cars, and it’s even had a go at making something with four-wheel drive (a prototype, built in the Eighties), but never has it combined all of this in the same machine.

The front-engined, shooting brake-bodied FF also marks the beginning of a radical new chapter in the firm’s history. Officially, the car is designed to take the lucky few from home to the snow-covered roads of Europe’s top ski resorts – but behind this lies Ferrari’s desire to grow in markets such as China, India and Russia, where big cars are big business.

The big question is, is it any good?

The FF gets off to a promising start. There has been plenty of debate about the appeal of its design. However, in the metal, the FF’s carefully judged proportions and delicate surfacing ensure the model has no problem turning heads.

As well as the familiar Ferrari red, there's a palette of new colours to choose from, including something that looks distinctly like a British Racing Green. At just 40mm shorter than the 612 Scaglietti, the FF is one of the biggest cars Ferrari has ever built, and there's no escaping its road presence, no matter what colour it's in.

Inside, the cabin is equally impressive. As you open the door for the first time, it's the quality you notice first. The rear seats will just about hold an adult, but most of the space in the back is reserved for the vast 450-litre boot.

In terms of driver appeal, soft leathers, brushed alloy trim, and bright red detailing on the instrument panel ensure the cockpit is every bit as inviting as one of Ferrari’s famous mid-engined coupés – albeit for very different reasons. However, if the space, design and comfort on offer in the interior suggests luxury and refinement on a previously unimagined scale, then think again.

At the heart of the FF is the new seven-speed, semi-automatic, four-wheel drive transmission. It was patented by Ferrari seven years ago, and it’s taken the firm that long to develop it into a system that's does the Italian firm's sporting pedigree justice.

Unlike conventional four-wheel-drive systems, which are driven through a single gearbox and rely on propshafts and differentials, the FF’s set-up uses a conventional seven-speed gearbox on the rear axle, and adds a second gearbox, with two gears, that's bolted to the front of the engine.

Described as a power take off unit, or PTU, energy is drawn directly from the crank, and then fed to the front wheels through a pair of wet clutches. As a result, it's lighter and more controllable than a traditional 4WD set-up.

The PTU’s gearing is set slightly higher than that of the standard gearbox that transmits power to the rear wheels, so to equalize the speed between front and rear axles, the clutches continually slip. The system only works when the rear wheels begin to spin, and each front wheel can be controlled independently.

The front wheels can also 'overspeed', meaning that they run even faster than the rear wheels. This means Ferrari can introduce something called torque vectoring – a kind of advanced traction control that uses engine power to improve grip, rather than just brakes, as a conventional ESP system does.

With a staggering 651bhp, the 6.3-litre V12 FF is one of the most powerful cars the firm has ever built – nearly as potent as the Enzo – and has performance figures to match. The 0-62mph sprint is covered in 3.7 seconds, while top speed is 208mph. So it's no surprise that Ferrari is billing this as the world’s fastest GT car.

A press of the steering-wheel mounted starter button fires the V12 engine into life. And it sounds absolutely glorious.

The controls are light, particularly the steering, while the control-laden wheel takes inspiration directly from Ferrari's F1 cars, and groups the advanced Manettino suspension, gearbox and traction control system together.

From rest, the operation of the four-wheel-drive system is virtually imperceptible, no matter what the road conditions are. In fact, often the only way to tell it’s working is from the dash-mounted screen. This displays a picture of the car which shows where power is being delivered. Most of the time it shows drive is going to the rear wheels, but when grip decreases, the display shows when all four wheels are being driven.

Apart from a very slight vibration through the pedals when you move off on slippery surfaces as the clutches engage, you never feel when power is being transferred. The gearbox is a masterpiece too, offering near-seamless shifts like an F1 car.

Dynamically, the FF does feel like a big car, but its chassis develops incredible grip, particularly from the front wheels, which frankly refuse to understeer.

The Manettino switch adjusts the comfort of the suspension. However, body roll remains similar whether you’re in Comfort or Sport modes – instead, the weight and precision of the steering and response from the engine and gearbox are made that bit sharper in the latter mode.

The steering is a little short of feel and isn’t quite as alive as that of a 458 Italia. Keen drivers might also find it takes some time to get used to the way the car exits corners. The way in which the front wheels pull you out of a bend takes some getting used to.

but there’s no denying that Ferrari’s new 6.3-litre V12 is impressive. The car isn’t particularly long-geared, but the engine takes its time for the revs to build, allowing you to make the most of the mid-range torque it offers and allowing effortless cruising.

But the thrust generated by the engine, and the incredible mid-corner balance all owe something to this car’s unique design. It’s a four-wheel-drive car that does without propshafts, plus it’s a four-seater shooting brake that’s described as a GT, but drives like a supercar.

Yes, it is very good, and yes it does break the mold. Quite simply, Ferrari’s future has never looked so exciting.