We get behind the wheel of the all-new 730bhp Ferrari F12 Berlinetta, ahead of its launch next year 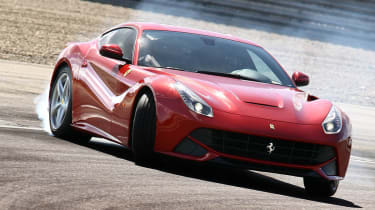 The F12 isn’t just faster than the 599 it replaces, it’s taken a giant performance leap. Despite packing the same power output as a Formula one car, and possessing a brutal turn of pace, it’s more forgiving than you’d think and effortless to drive fast. The mid-engine 458 is still a marginally sharper driving tool, but you could easily drive the F12 everyday and there’s space in the back for your bags, too. Without doubt, this is the world’s best all-round supercar.

The F12 Berlinetta is the quickest and most powerful road-going Ferrari ever. But this isn’t a wide-bodied, carbon-fibre clad hypercar, it’s a front-engined GT that needs to be both refined on the motorway and ballistic on the track. We travelled to the home of Ferrari in Maranello, Italy, to find out if the successor to the 599 GTB really is the ultimate all-rounder.

The performance figures alone are a mouth-watering prospect. Power comes from a reworked version of the Ferrari FF’s 6.3-litre V12 with 730bhp and 690Nm of torque. The 0-62mph sprint takes 3.1 seconds, 0-124mph takes 8.5 seconds and the top speed is 211mph. With the right driver behind the wheel it can lap the Fiorano test track in 1 min 23 seconds too – faster than any Ferrari that’s gone before, including the Enzo.

It’s fitting then that our first acquaintance with the F12 was around the Fiorano circuit. Normally, front-engined GTs feel out of their depth on a track, but from the first corner it’s clear the F12 is a sports car at heart. Put your foot down and the acceleration is breathtaking - not quite in the Bugatti Veyron’s league, but not far off. Maximum power arrives at 8,250rpm so it’s an engine that’s needs revs to produce it best. Hold on to the 8,700rpm limiter, though, and you're treated to an incredible metallic crescendo from the exhausts.

The steering is light, but thanks to a much lower ratio than the 599 there’s zero slack and the tiniest flick of the wrists sends the car spearing into a corner. The brakes (carbon-ceramic discs with new carbon pads) are monstrously strong, even after several laps on track, and the way this car changes direction - with so little bodyroll - is more like a mid-engine supercar than a GT. Even with 730bhp torturing the rear tyres, this is an easy and forgiving car to drive fast – as long as you keep it smooth.

There’s science behind why it feels so good to drive. Compared to the 599 GTB it replaces, the wheelbase is 30mm shorter, it’s 20mm narrower and thanks to a chassis and body made from a cocktail of different aluminium alloys, it weighs 70kg less. By lowering the engine, dashboard and seats, the centre of gravity is now lower and further back in the car – key to the F12’s incredible high-speed stability and agility.

Whereas the 599 could never be described as a Pininfarina masterpiece, the F12 looks sensational in the flesh. With its more compact dimensions and cut-off Kamm-tail, which flows into the diffuser, it manages to be aggressive and elegant at the same time. Every curve has a function, too, such as the ‘aero-bridge’ above the front wheel arch, responsible for channelling air smoothly down the sides of the car and over the rear wheels. Ferrari claims the F12 is twice as aerodynamically efficient as the 599 – one of the main reasons why it uses 30 per cent less fuel and CO2 emissions have dropped from 490g/km to 350g/km (so long as you have the optional HELE stop-start system fitted).

The interior is modelled closely on the 458 Italia, but with certain elements that are unique to the F12. Most of the controls, including the indicators, lights, wipers, engine start and Manettino dial are located on the steering wheel. The latter allows you to toggle through five different driving modes and tweak the gearbox, E-diff, ABS, suspension and stability control. There’s no central display, instead the sat-nav and audio are shown on two tft screens flanking the huge central rev counter, while the bulls-eye air vents are a completely new design.

Despite smaller dimensions than the 599, there’s identical amounts of interior space, and the low seating position is spot on. There’s even a 350-litre boot which can be expanded to 500litres if you remove the rear divider – the same as a VW Golf Estate.

Ferrari claims 20 per cent of F12 customers will use their cars everyday, so its on-road behaviour is just as important as on the limit. What makes the F12 so remarkable is that instead of biting your head off at any opportunity, it makes 730bhp feel entirely manageable, even at low speeds. Around 80 per cent of the maximum torque is available at just 2,500rpm, and when you combine than with a phenomenally smooth twin-clutch gearbox, impressive refinement and an acceptable ride in the softer of two damper settings, you get a car that’s enthralling to drive whether you’re breaking lap records or cruising to the shops.