We drive the thrilling 769bhp Ferrari F12tdf, and find it's one of the most extreme GT cars ever made 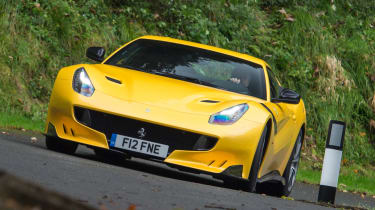 The Ferrari F12tdf is destined to be one of Ferrari’s all-time legendary road cars alongside the Daytona and F40. It is more old-school than the LaFerrari – less of a technical marvel than that hybrid hypercar – yet in its own brutal way, it is just as sophisticated. It is not a car for the foolhardy or the inexperienced; indeed, it is a hard car to master – but one that will always be rewarding to drive.

First, the dull stuff: the boot on the Ferrari F12tdf is easily big enough for weekend luggage for two. But there is more interesting stuff to talk about at the other end of the car - principally a 769bhp 6.3-litre naturally aspirated V12 engine. Yes, you read that first number correctly: that’s an extra 39bhp over the standard F12 – but we’ll come back to this monstrous powerplant in a moment.

Ferrari has thrown everything it has at the 799 Tour de France special editions that it is building. Just over 100kg has been shed from the car’s kerbweight, bringing the dry weight down to an impressive 1,415kg (if you specify some of the optional lightweight parts). Carbon fibre has been used for the front and rear bumpers, the underbody aerodynamic and what Ferrari calls the Aerobridge, a neat gulley that channels air from the bonnet down the sides of the car. Oh, and there are lashings of carbonfibre inside the cabin, too. 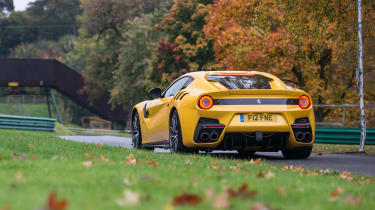 The aerodynamic changes aren’t just for show; Ferrari says that you’ll be getting 230kg of downforce on the front end at 124mph as you’re on your way to the tdf’s top speed of "over 211mph". Even the rear screen has been raised slightly to channel more air to the extended rear spoiler.

The brakes are taken from the LaFerrari hypercar, while the springs are 20 percent stiffer than a regular F12's and the dampers have been retuned. But the real party piece, which makes its debut on this car, is a four-wheel steering system that Ferrari calls "Virtual Short Wheelbase" – in which the rear wheels steer in the same direction as the fronts to increase stability. Wider Pirelli P Zero Corsa rubber replaces the standard F12’s tyres and this, in conjunction with the four-wheel steering, totally removes any hint of understeer from this Ferrari. 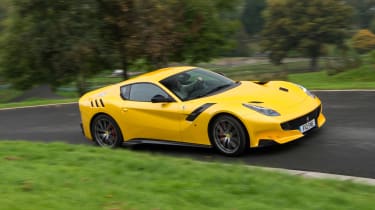 But as promised, back to the tdf’s engine. Without question, it is the most exhilarating, dramatic and wondrous powerplant installed in any road car. It even makes a Lamborghini Aventador’s V12 feel a bit tame and puny. If you’re not a fan of the modern turbocharged engine with its flat torque curve, then you’ll love this motor. The rev limiter is set to 8,900rpm – 400rpm past the point for maximum power. Even with the F12tdf’s Manettino driving mode dial flicked to its mildest setting, the throttle response is savage; in Race, CT Off or ESC Off it is almost too brutal.

Brutal is something that you must never be with this car. For starters, you have the Catch 22 situation of the tyres needing to be warm before they offer plenty of grip – but the challenge is getting them warm without having an incident in the process. Make no mistake, the F12tdf is an intimidating car. Not just because of the raw power, but because of its instant response to steering inputs and the vehicle's not inconsiderable size. You get ultimate rewards from the tdf if you regularly take it on a race circuit – but even there you must exercise extreme caution.

For such a dramatic car, the F12tdf is remarkably straightforward to drive at sub-mach speeds. It’s unbelievable how an engine with such a huge power output is happy pootling along in traffic.

Ferrari is master of stylish yet simple interiors. Ergonomically, the F12’s layout is outstanding: with just a few simple controls on the steering wheel for the engine start, indicators, wipers and Manettino driving mode switch. There’s one other button with a damper graphic on it, which allows you to select the softest damper setting – and can even be applied if you’re in the safety-net-removed, most extreme mode for throttle and steering. In any other setting, the damping is too extreme for UK roads. 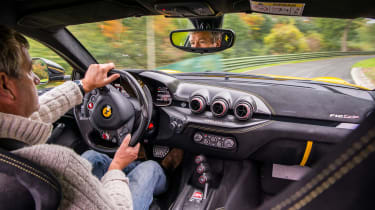 All 799 of Ferrari’s £339,000 F12tdf road cars have found homes, and all will have paid for themselves several times over if the rumours of cars changing hands at over £1m are true. A sound investment, for sure, but behind this is one of the most extreme GT cars ever made – powered by one of the most dramatic engines ever fitted to a road-legal car.

The power unit even looks sensational, too, sat well back in the engine bay with its crackle finished red cam covers not hidden by the expanses of shiny carbon fibre that cover the less sexy bits that live under the Ferrari’s bonnet. Tour de France? Tour de force, more like.