The new Ferrari F12tdf is sold out but it's nevertheless a very, very special car - with an incredible V12 in the front. 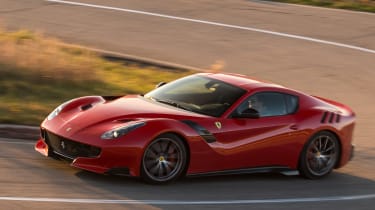 The Ferrari F12tdf is a car of extraordinary talents, with what could perhaps be described as the best drivetrain of any car on sale today. The 6.3-litre V12 is a masterpiece. However, the incredibly agile chassis requires experience to exploit and time to adapt to. It’s not immediately intuitive and at times the F12tdf can can feel edgy and unforgiving. The 799 hand-picked customers are likely to be very experienced (with at least five other Ferraris in their collection) and many will relish the challenge. For some though, it might be a step too far.

It hasn’t always been this way, but in recent years it seems like Ferrari can do no wrong. Well, there’s the California T, but let’s think of that as Ferrari’s Cayenne – a means to build sales and profitability in order to allow their real sportscars to retain a level of poise, agility and unerring focus that is unique and fabulous to experience.

So, Ferrari is on a roll. The dearly departed and impossibly hardcore 458 Speciale was joyously exciting. The new turbocharged 488 GTB elevates forced-induction to new heights in terms of response and ultimate power delivery, and the F12 is a GT car endowed with old school V12 glamour but cutting-edge dynamics and genuine usability. 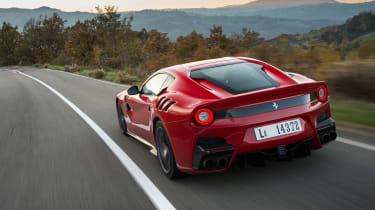 The F12tdf, then – a lighter, faster and more aerodynamic version of Ferrari’s flagship front-engined V12 car – should be nothing short of a landmark. Just 799 will be built at £339,000. They’re all sold, of course.

The spec sheet is dripping with promise. The already scintillating 6.3-litre V12 is reworked to produce 769bhp at 8500rpm (up by 39bhp) and 681Nm at 6750rpm (a 15Nm increase). It also has six per cent shorter gear ratios and the gearbox shifts even faster – 30 per cent quicker on upshifts and 40 per cent on downshifts. Weight is down too, thanks to extensive use of carbon fibre. 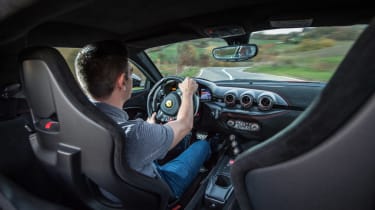 The front and rear bumpers are carbon fibre, as are the underfloor aerodynamic devices, the extended side sills and the Aerobridge Evo – a device that directs the air from the bonnet and down the sides of the car. The black shiny weave is ever present in the cabin too, resulting in a weight loss of 110kg. Performance is nothing short of incredible: 0-62mph in 2.9-seconds, 0-124mph in 7.1-seconds and a top speed of over 211mph.

Of course, you’d expect more power and less weight – and maybe the much-revised aerodynamics that see downforce increased by 87 per cent. But the real innovation is in the chassis and electronics. The tdf is the first Ferrari fitted with four-wheel steering, here dubbed ‘Virtual Short Wheelbase’.

In fact, that title is slightly misleading. The hyper responses that are so reminiscent of a very compact car are actually created by mechanical changes – primarily much wider front tyres, up from 255-section to 285 and much stickier Pirelli P Zero Corsa rubber, too. The four-wheel steer is there to stabilise the car. Without it Ferrari claim the tdf couldn’t have this level of agility without unstable oversteer that only the very best drivers could cope with. 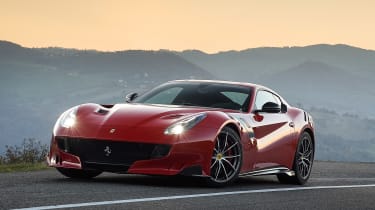 As it turns out, the F12tdf – even with the rear-steering function that turns the rear wheels up to one degree in phase with the fronts – is not a car for novices. On Ferrari’s own test circuit it initially feels almost scarily responsive and quite unnatural, too. The front dives into corners and unsettles the rear.

In mild panic you try to correct the ensuing (imagined) slide, only to find it was really just the tdf setting itself up in its preferred stance, with the tail always taking on a few degrees of oversteer. Until you learn to trust the car, the odd sensation of the front and rear being slightly disjointed makes it tricky to be smooth and progressive.

Out on the roads the tdf is more immediately friendly but it remains an extremely hardcore car in terms of response, performance and ride quality. The engine is just fabulous, a soaring, relentless, screaming V12 that makes any other engine you care to mention feel dull and a bit weedy. 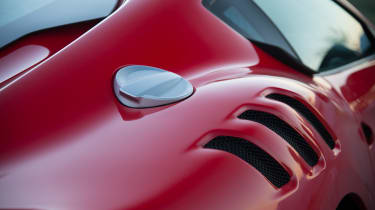 The seven-speed gearbox is also incredibly precise and eye-wateringly fast. The speed with which this car can cover ground isn’t in question. It’s positively unhinged. However, the F12tdf remains quite intimidating and at times a bit of a mystery to the driver.

It’s not inherently evil by any means and grip and traction are remarkable, but you never feel absolutely certain that it’s going to look after you. Allied to the pretty firm ride the result is that it’s just not quite as fluid as the other great Ferraris. It’s an event, a challenge, and it’s endowed with one of the great engines of all time. Just be ready for it.