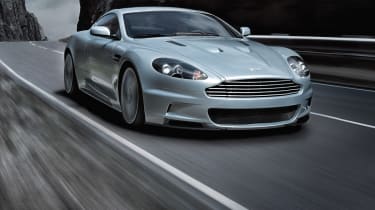 Introduced to the public by none other than James Bond in the 2007 film Casino Royale, the Aston Martin DBS takes over the Vanquish's mantle at the top of the Aston Martin range. With aggressive, beefed-up looks compared to the more svelte DB9, it's been criticsed by some for being too showy and 'in your face' for a classic British sportscar, but this will hardly matter to anyone enjoying the car's 4.3-second 0-60 time or imperious long-distance cruising ability. The DBS is a hand-built masterpiece that embodies all the very best qualities of high-end British manufacturing.

Adaptive suspension, a special lightweight aluminium chassis and incredibly powerful carbon-ceramic brakes – not to mention that 510bhp engine – make the DBS a very fine driver's car indeed. It faces stiff competition from the likes of the Ferrari 599, which delivers a greater sensation of speed and excitement, but the Aston hits back with a truly spectacular exhaust note from around 3,500rpm. The aforementioned suspension can be tuned to offer a cosseting ride on rough surfaces, or dialed up to its stiffest setting for race-car-like reactions on smoother roads. It's hard to imagine anyone being disappointed with the performance of this car.

The £175,000 purchase price is only the start – Aston Martin DBS ownership also demands that you spend a small fortune on petrol, insurance, road tax and servicing on an ongoing basis. It's simply the price that has to be paid to continue enjoying such a special car. On the plus side, the DBS's rarity makes it less susceptible to depreciation than the less expensive cars in the Aston Martin range, and it's likely to become a valuable and sought-after collector's car in the long term, in the mold of the classic Bond car, the DB5.

The Aston Martin DBS has the same basic Ian Callum-designed body shape as the DB9, but gets its own distinctive look courtesy of wider flared wheelarches and deep cooling ducts set into the long bonnet. There are also chunky sill extensions down the side and a fantastic-looking carbon diffuser at the rear, which hints at the DBR9 GT racing car that inspired the DBS. Inside, it's slightly disappointing to see switchgear sourced from Volvo and Jaguar used on such an exclusive car, but overall the ambience is pure Aston Martin: sumptuous luxury with strong hints of dynamic ability.

The Aston Martin DBS's hardcore nature is clearly illustrated by the fact that the token rear seats seen in the DB9 are not even available as an option here – it's strictly a two-seater car. Yet unlike some more low-slung supercars, the DBS offers plenty of head and legroom for its occupants, in keeping with its grand touring roots. Driver and passenger will have to travel light, though, as the boot only holds 186 litres of luggage. Engine noise is more noticeable than in lesser Astons, which will suit enthusiasts just fine, but that does make the DBS not quite as relaxing on the motorway as its stablemates.

Reliability was an issue with Aston Martins as recently as the DBS' predecessor, the Vanquish, but the company has made great strides in quality control in recent years, so its current line-up is a lot more dependable. The 6.0-litre V12 engine is basically two Ford V6s joined together, and while it may not be the last word in technology, it is at least a very well proven engine that rarely gives trouble. There's no official crash-test data for the DBS, but the same super-stiff aluminium chassis that makes it such a joy to drive should hold up well in an accident. 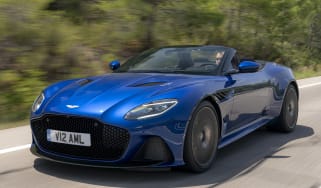 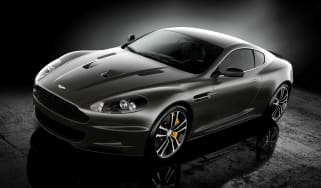 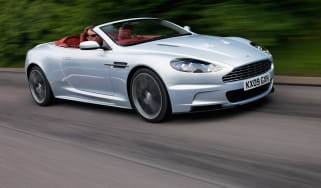 Discounting the £1.4m limited-run One-77, the DBS Volante is the pinnacle of Aston's range
Aston Martin DBS Carbon Edition 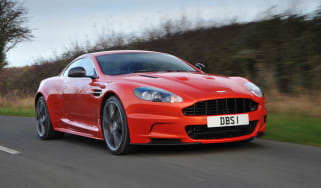 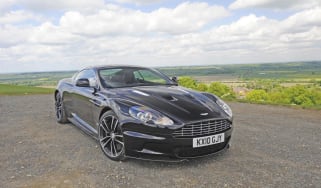 Special-edition flagship gets mean and moody. And the good news is it’s as exciting to drive as it is to look at
Aston Martin DBS Volante 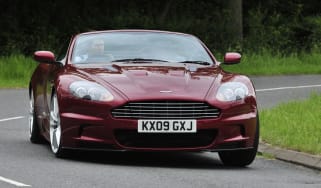 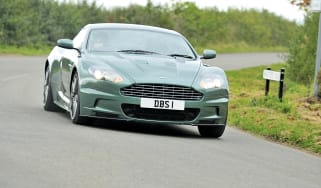 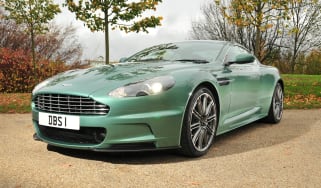 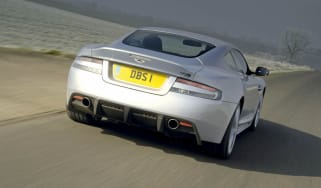 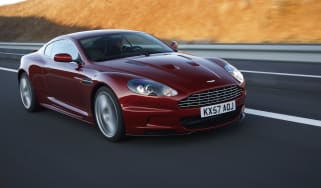 James Bond has a new company car - the Aston Martin DBS. But is it the firm's best ever motor?
Skip to HeaderSkip to Content