James Bond has a new company car - the Aston Martin DBS. But is it the firm's best ever motor? 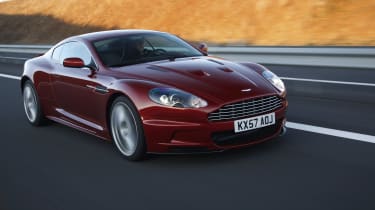 While it feels every inch the kind of machine James Bond would covet, the DBS is also a big leap forward for Aston. The clever adaptive dampers mean it feels like a true GT and a supercar at the same time. Yes, it’s hugely expensive, but when it comes to desirability, not many other models can even come close.

James Bond is back, and so is Aston Martin. But while the coolest partnership in the history of film has never looked better, exactly what is it that makes Aston Martin – and 007’s car in particular – so incredibly desirable? To find out, we got behind the wheel of the latest, and what is possibly the greatest, model yet.

Just as actor Daniel Craig has been billed as the quintessential Bond, the new DBS is described as the ultimate expression of the DB9. It’s the fastest, most expensive machine in the British marque’s current line-up.

Well, no car can match the newcomer for coolness. Drawing on the looks of the firm’s DBR9 race entry, it adds skirts, spoilers and ducts. The result is a suave yet aggressive design. In a first for Aston, many body panels are made of carbon fibre which, along with the carbon-ceramic brake discs, help to save around 42kg.

Inside, the cabin is trimmed in suede and leather, with new graphite-backed dashboard instruments. Strictly a two-seater, it gets sports seats or optional Kevlar racing buckets. It’s not perfect, though. Once you’ve sorted a driving position, you realise the DBS is claustrophobic and that a lot of the switchgear is from Jaguar and Volvo.

Still, all that is forgotten as soon as you insert the sapphire key fob and fire up the 510bhp 6.0-litre V12 engine. Erupting with a deep, deafening bark, it wouldn’t sound out of place in the pitlane at Le Mans – and it gets even better on the move.

Thanks to a special exhaust bypass port, the engine develops 70bhp more than the DB9’s. It combines with a new six-speed gearbox to slash a sixth-of-a-second off the 0-62mph sprint time – dropping to 4.3 seconds. Top speed jumps 5mph to 191mph.

While you only need to sit in third in most situations, the DBS is at its best when revved beyond 4,000rpm – at which point, the engine note deepens, a huge baritone roar enters the cabin and the car lunges forward.

The Aston’s new two-mode adaptive dampers are just as impressive. In the default ‘comfort’ mode, the suspension is surprisingly compliant – especially considering the lower ride and 20-inch alloy wheels.

Select the harder setting, and they stiffen further, making the car ideal for use on smooth roads or race tracks. Grip in both modes is absolutely epic. But although the well weighted steering provides lots of feedback, the rear is vague. The brakes are truly incredible, though, easily slowing the 1,695kg supercar repeatedly without fade.

Now the Vanquish is axed, the DBS is the ultimate Aston – and it’s a better car in every way. It’s far more expensive than the DB9, but for the 500 buyers taking delivery next year, this will be worth it just to feel like James Bond.

RIVAL: FERRARI 599 GTB WITH its 620bhp V12 – sourced from the Enzo – the Ferrari is faster and more powerful. It also provides amazing poise, agility and comfort.