Special-edition flagship gets mean and moody. And the good news is it’s as exciting to drive as it is to look at 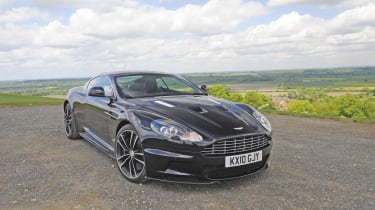 The DBS exploded on to our screens in Casino Royale – and this sleek Carbon Black Aston shows it’s never looked better. The fearsome V12 is untouched but feels as potent as ever, while the Touchtronic gearbox and ceramic brakes make the most of the DBS’ dynamic abilities. Unlike most special editions, Aston hasn’t put a cap on the number it will be build. And if you prefer the DBS Volante or V8 Vantage, they can be had in Carbon Black trim, too.

Four years after the DBS burst on to the big screen, James Bond’s company car has finally been given a sharp black suit to match its suave owner’s! Meet the DBS Carbon Black – a special edition of Aston’s flagship coupé.

There’s no doubt the DBS’ aggressive design has split opinion, with many Aston fans claiming its bodykit ruins the purity of the DB9’s shape. But dressed head-to-toe in black, inside and out, the DBS’ stealth-like styling has never looked better.

Unique to this car is its Carbon Black metallic paintwork, and a black gloss finish on the inner edges of the 20-inch alloys. Contrasting this is a Magnum silver mesh covering the bonnet vents and diamond-turned surfaces of the wheels. The mean and moody theme continues inside with swathes of Obsidian black leather, a matching Alcantara headlining and a piano-black centre console.

Carbon fibre sill plaques with the DBS Carbon Black logo greet you as you swing the door open and sink into the padded sports seats. Plus, buyers can choose, at no extra cost, between the 2+2 arrangement of our model or opt for lightweight carbon fibre and kevlar buckets, which cut 17kg from the 1,695kg kerbweight.

Mechanically, the Carbon Black is identical to the standard DBS, but that’s not such an issue when you have a mighty 510bhp 6.0-litre V12 to begin with. The superb paddleshift Touchtronic gearbox – the same six-speed ZF unit used in the Jaguar XJ and XF – comes as standard, as do carbon-ceramic brakes, which are the size of dinner plates.

Its engine isn’t the most advanced on the market, but there’s something deeply satisfying about the way the DBS gathers pace. While it’s not instantly responsive like the V10 in Audi R8’s, once it’s gained momentum, the unit fires the DBS towards the horizon, leaving a deep-chested growl from the exhausts in its wake. Press the ‘Sport’ button and select the firmer damper setting, and the car can be threaded through corners at quite a pace. Turn in too fast, though, and it’s impossible to disguise the kerbweight – it’s clear the DBS is more at home on sweeping bends than twisting back roads.

On paper, the Carbon Black’s £179,500 asking price, some £9,000 more than the standard car, seems steep, but as always with an Aston, it feels more exceptional than simply the sum of its parts. This is one special edition that lives up to its name.

Rival: Bentley Supersports The most focused Bentley ever built offers more power, less weight and a firmer chassis set-up. Its 621bhp 6.0-litre W12 engine is capable of slinging the GT from 0-62mph in 3.8 seconds and on to a 204mph top speed. And it’s nearly as refined and comfortable as the standard car.