James Bond's company car has finally hit UK shores. We get behind the wheel. 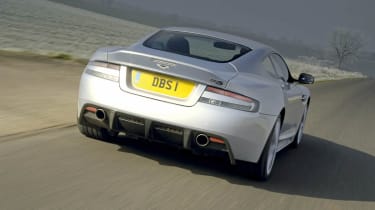 With its balanced chassis and powerful engine, the DBS is a pleasure to drive. More than simply a modified DB9, much of the car’s engineering is unique. With new engine technology, plus lightweight body panels, it’s not only a great Aston, but a brilliant supercar, too. There are flaws, but it still has the character to successfully compete with the very best this sector has to offer.

Who could forget 2007? Supercar fans didn’t just get a new Aston, but a new Bond motor, too. Yet this year looks set to be even better – so say hello to the first right-hand-drive example of the sensational DBS!

Powered by a 510bhp 6.0-litre V12 engine, fitted with active suspension and cloaked in a carbon fibre body, the car is not only among the most exclusive the firm has ever built, it’s also one of the most advanced.

At first glance, the DBS looks like an evolution of the established DB9. It gets bigger wheels, sculpted sills, and a more detailed nose. But it’s once the engine starts that you get the first clue to just how different the newcomer is to the DB9, as a crisp and aggressive exhaust note sounds out.

The clutch feels light, too, and the gearbox slides through the six ratios with ease. At low revs, the engine is responsive, yet refined. However, push the throttle to the floor, and everything changes. Pedal travel is long, but it doesn’t take much time for the DBS to gather pace and rev cleanly and quickly to its 7,200rpm limiter.

Traction control channels the V12’s performance effortlessly into the road, resulting in a 0-60mph sprint of 4.3 seconds. Top speed is a claimed 191mph. But it’s the suspension and chassis that serve up the biggest surprise. Active dampers allow the driver to choose between comfort and sport settings for the suspension at the press of a button, and mean the car rides comfortably over uneven roads.

Steering is pinpoint accurate, and thanks to grippy Pirelli tyres – specially developed for the DBS – you are never left feeling that the Aston lacks grip from the front end.

Switch to the sport mode, and the ride stiffens noticeably. The setting gives the motor greater stability on undulating roads, and helps maintain its poise over bumps, but is probably too harsh to live with on a daily basis.

But then there is the price to consider. At £165,000 the DBS is pitched towards the very top of the supercar tree. And it’s not without its flaws. Purists could argue that the rear suspension is not well enough damped, and feels floaty on uneven surfaces.

Still, the Aston has tremendous character, and begs to be driven. And frankly, we can think of few other supercars we would rather spend time with. It seems 007 agrees...