We drive the British car maker's latest version of its range-topping DBS. 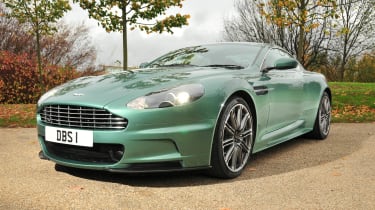 The DBS is the ultimate expression of the unique Aston Martin blend of power, style and beauty. With its awesome performance, lively rear wheel drive layout and gorgeous exhaust note the DBS is a real super car. Crucially, the Touchtronic gearbox doesn’t ruin the experience and its smooth shift action and decent manual control mean it’s well suited to this most mighty of Aston’s.

It’s the pinnacle of the Aston Martin line up and the car of choice for James Bond. And now for the first time the stunning DBS can be ordered with the British firm's Touchtronic gearbox.

The transmission of choice on 90 per cent of standard DB9’s the automatic gearbox has been reworked to suit the sporty nature of the DBS. Aston Martin’s engineers contemplated using the automated manual Sportshift unit from the smaller Vantage but decided that despite its more traditional torque converter set up the automatic Touchtronic could offer the right blend of usability and involvement to keep DBS customers happy.

And the end result is very impressive – when driven in conventional auto mode the gearbox makes the DBS easy to live with in traffic and it copes with low speed manoeuvring better than the automated manual in the Vantage. But given the DBS’s power and focused handling, plenty of driver interaction is crucial and thankfully the steering wheel mounted paddles offer excellent control and a lovely throttle blip on the downshift. The upshifts are 15 per cent faster than in the standard DB9 and if you press the Sport button they are 25 per cent quicker. In addition to making up changes faster the Sport button also gives you a sportier throttle response.

Crucially, if you change up a gear at half throttle the changes are smoother than the Vantage’s Sportshift transmission too and with a shorter final drive ratio, despite being 30kg heavier, the Touchtronic DBS matches the manual’s 0-100mph performance.

Not only that, emissions drop from 388g/km to 367g/km, while claimed combined economy rises from 17.2mpg to a still scary 18.2mpg. But then fuel costs are not high on the list of super car owners concerns and even with its £3,000 price premium over the manual it’s no surprise that Aston Martin predict that the Touchtronic will account for 75 per cent of future DBS orders.

And with demand for the sporty flagship outstripping supply the British firm has increased total DBS production from 500 to 1,000 cars a year. Other updates to the 2009-model year car include a standard Bang and Olufsen audio system and the option of 20-inch diamond turned alloy wheels, which are 2Kg lighter per rim. All of which means it isn’t just James Bond that can have extra toys on his DBS.