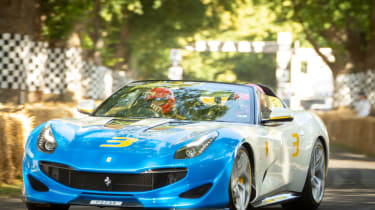 The Goodwood Festival of Speed hillclimb plays host to some of the world's most exclusive metal. And this year is no exception with Ferrari showcasing several one-off customer cars including this - the Ferrari SP3JC.

With an estimated price tag between £3-5 million and one very forgiving owner, Auto Express had the chance to ride shotgun up the famous Goodwood hillclimb.

Seeing it in the metal for the first time, all of the intricate design details, especially the two-tone blue and white paint, immediately grab your attention. Built as a one-off commission for a British customer, the design brief was to create a pure roadster without compromise.

The front and rear of the car have been heavily restyled, including the addition of glass bonnet inserts to showcase the V12 engine. The roof has been removed and a new rear deck featuring carbon fibre roll hoops added along with yellow edged buttresses. The project took two years to complete.

Before you can tackle the hillclimb you have to get there first -  the route to the start a nose-to-tail traffic jam of exotic metal. After what seemed like an age, we finally rolled up to the start line, donned our Ferrari spec race-helmets and were off. From the moment we fired off the line the thrust of the V12 was vicious with a howling exhaust note accompanying the plumes of tyre smoke as we sprinted away from the line.

Ferrari has declined to reveal performance figures, but as the SP3JC is based on the F12tdf, and uses the same 769bhp 6.3-litre V12 engine, a 0-62mph time of 2.9 seconds seems likely - especially from the passenger seat. 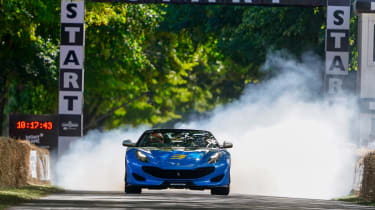 From here, progress up the hill was rapid with Goodwood quickly becoming a blur. The corners did give some respite, with the braking points allowing a glimpse of the waving crowd before returning to three-figure speeds. In a little over a minute, we crossed the finish line of the 1.16-mile course with the V12 howling in the background.

According to our pro-driver Ross Kaiser, we hit somewhere in the region of 110mph during the run before adding that he was “backing off a bit” due to it being a customer-owned car.

For all of the latest news from the 2019 Goodwood Festival of Speed, visit our live page...