The Fiesta Mk3 grew up as it headed into the Nineties, plus brought us the excellent XR2i 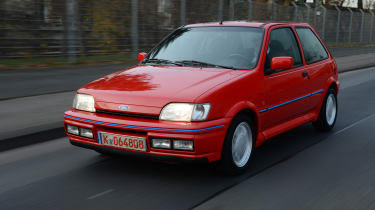 The success of models such as the Peugeot 205 and Fiat Uno meant Ford went for bold with the third-generation Fiesta in 1989. Out went the boxy lines and ageing underpinnings of the first two models, and in came a slicker look and more sophisticated mechanicals. More importantly, the car was available with a five-door bodystyle for the first time.

A longer wheelbase meant the Mk3 set the class standard for space, while semi-independent torsion beam rear suspension helped the ride and refinement.

This more grown-up approach extended to the interior, which had a far more modern design. The neatly laid-out dash borrowed switchgear from the larger Escort, while the novel injection-moulded seats were more comfortable yet compact. The Mk3 also got a heated windscreen and anti-lock brakes.

There were changes under the bonnet, too, where Ford’s latest line-up of efficient High Compression Swirl engines was used alongside the existing CVHs. For hot hatch fans, the big news was the arrival of fuel injection, resulting in the XR2i with up to 110bhp. At the top of the range was the fiery 132bhp RS Turbo, identified by its distinctive three-spoke alloys and green trim inserts.

Climb aboard a Mk3 today and it’s not hard to see why it was such a leap forward. The neatly laid-out dash looks modern, while the bright fabrics and large glass area create an airy atmosphere. On the move, the standard car’s ride is soft and composed unlike the firmly suspended later Zeta-engined XR2i in our pictures. However, all models suffered from slow steering, and as with many older Ford models, the wheezy engine doesn’t like to be worked hard. In all other respects, though, it’s easy and hassle-free to drive – and it’s not hard to see why it became the longest-serving Fiesta, finally bowing out as the Classic-badged model in 1997.

Fiesta fact: The Mk3 was the first model to come in a choice of three and five-door bodystyles, as well as the first to get Ford’s mechanical anti-lock braking system.