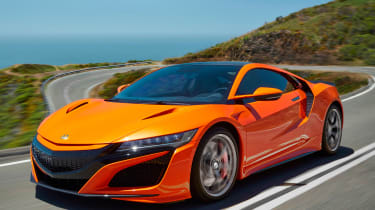 Honda has fettled the NSX supercar with a mild makeover for 2019, the latest iteration of the firm’s flagship going on sale in limited numbers in Britain early next year.

It’s a mechanical reshuffle with design tweaks kept to a minimum. The only changes you’ll spot from outside is a new upper front grille now colour-matched to the bodywork paint, while the grilles dotted around the car turn gloss-black. A new bright orange paint colour called Thermal Orange Pearlescent is now available, and can be applied to the brake calipers too.

Nothing changes inside, but two new upholstery options have been added. Buyers can now spec full red leather, and a new Indigo Blue trim has been added on the Alcantara and leather option.

The revised car gets larger front and rear stabiliser bars, which Honda says increases stiffness by 26 per cent at the front and 19 per cent at the rear. Alongside the suspension tweaks, Honda has also recalibrated the software controlling the hybrid system, plus the electric power steering and stability control. Finally, the dampers have been tweaked in a bid to deliver a more cosseting ride when the NSX is toggled into its softest drive mode. Honda says this change doesn’t affect the car’s stiffer settings intended for track driving. 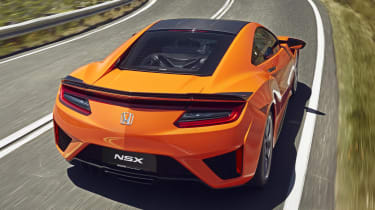 Changes to the twin-turbocharged 3.5-litre V6 hybrid powering the NSX include uprated injectors, tweaks to the way the turbos manage heat and a new particulate filter to keep the NSX in compliance with Euro 6d-TEMP emissions regulations. Honda has not revealed if the changes unlock any additional power over the 573bhp the current car boasts.

Finally, the NSX gets new rubber as standard too. Every car will be equipped with Continental SportContact 6 tyres, developed exclusively for the NSX.

With all these changes in place, Honda claims that the NSX is now two seconds a lap faster around the Suzuka circuit in Japan. Prices are not yet available, but a small number of the new car will be made available in Britain at the beginning of 2019.

The NSX isn't the only updated performance car coming up for Honda - a refreshed Civic Type R has been caught testing.