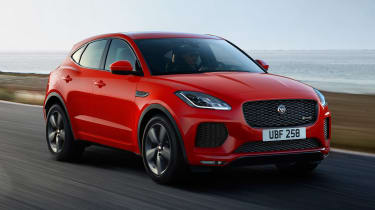 Jaguar has launched a new special edition variant of its E-Pace SUV. Called the Chequered Flag Edition, it’s essentially a better equipped version of the range-topping R-Dynamic model with a host of performance and styling upgrades, as well as a unique colour palette. It’s on sale now, with prices starting from £40,050.

Inside, the E-Pace Chequered Flag Edition gets an R-Dynamic sports steering wheel, black shift paddles, a 12.3-inch digital gauge cluster and a pair of heated front seats, trimmed in Ebony Grained Leather with red stitching. Revisions include a new 10-inch infotainment system with support for Apple CarPlay and Android Auto.

Buyers have the choice of four engines. The range opens with Jaguar’s turbocharged 2.0-litre four-cylinder diesel engine, producing either 148bhp and 380Nm of torque or 178bhp and 430Nm of torque. Both engines are mated to a nine-speed automatic transmission and an all-wheel-drive system.

Petrol options are also available, with Jaguar offering a turbocharged 2.0-litre four-cylinder unit in two states of tune. The lesser-powered model produces 197bhp and 320Nm of torque, while the most potent version has 246bhp and 365Nm of torque. Like the diesels, both are mated to a nine-speed automatic gearbox and an all-wheel-drive system.

Other features include Jaguar’s Adaptive Dynamics system, which claims to provide improved handling and ride comfort by adjusting the E-Pace’s damping and body roll according to the road surface. A range of optional extras will also be available, including a load-space partition net, Matrix LED headlights and Jaguar’s newly-introduced pet-pack.

Now read our review of the standard Jaguar E-Pace. Let us know your thoughts in the comments section below…