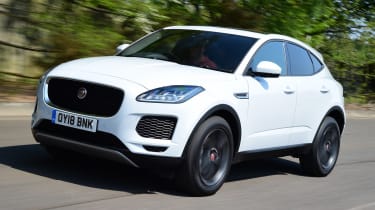 If you’ve lusted after a Jaguar F-Pace but wanted its essence bottled-up in a smaller package, then the Jaguar E-Pace isn’t quite that car. It’s a competent member of the small premium SUV market, though, because it's decent enough to drive, smart enough to look at, and available in a dizzying number of configurations – at least 54 by our latest count – but it ultimately fails to stand out against some particularly strong rivals. Have a good long sit in one before you take the plunge, as the interior isn’t the most exciting place to be, while the car's running costs could be better.

Small premium SUVs are having a bit of a boom at the moment, and the Jaguar E-Pace is in a prime spot to take sales. It's the smallest car for sale in the Jaguar SUV line-up (a range that didn't exist before 2015), and whether you want to pay the list price or lease one, the E-Pace is offered in a wide range of configurations to suit your budget.

But the E-Pace doesn't have the premium small SUV market to itself. There are a number of manufacturers that are fighting for market share in this lucrative sector. Chief among the E-Pace's rivals are the BMW X1 and X2 duo, plus the Audi Q3 and the excellent Volvo XC40. There's also the Lexus UX, plus in-house competition from the second-generation Range Rover Evoque. Finally, Mercedes will join the party in 2020 with the GLB.

In terms of design, the E-Pace is recognisably a Jaguar, but the designers haven't just created a shrunken F-Pace. The baby Jaguar SUV has its own distinctive proportions, with shorter front and rear overhangs, while the low roof line is said to be inspired by the F-Type coupe. Inside, the dashboard layout is more familiar, with lots of existing Jaguar switchgear and materials used to create an upmarket ambience. 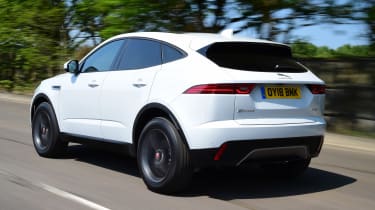 The Jaguar E-Pace range comprises standard, S, SE and HSE trims, while all cars can be upgraded with an R-Dynamic pack that adds a sportier look inside and out. All cars are powered by 2.0 Ingenium petrol and diesel engines, badged P200, P250 and P300 or D150, D180 and D240. Front-wheel drive features on the D150 in standard and S guises, but the rest of the range is four-wheel drive. Also, a six-speed manual is offered with the D150 and D180 engines in standard and S trims, but the rest of the range gets Jaguar's latest 9-speed auto.

Prices for the E-Pace start from around £29,000, with the R-Dynamic pack adding around £1,400 to the list price and a bespoke body kit, sports seats, steering wheel and sports pedals for the money. At the top of the range, the most powerful P300 HSE weighs in at around £47,000. We think you don't need to go higher than S trim to get a decent E-Pace, though, as these come well equipped and dip below the £40,000 barrier, while the D180 will provide a good balance between performance and economy. It's up to you if you think adding the R-Dynamic pack is worth the extra.

Jaguar is also prone to rolling out limited-edition models from time to time. The E-Pace has already benefited from the treatment in the form of the Chequered Flag edition, which sits between SE and HSE trim in terms of specification and price, and adds a panoramic roof and motorsport heritage-inspired design flourishes.

For an alternative review of the latest Jaguar E-Pace SUV visit our sister site carbuyer.co.uk 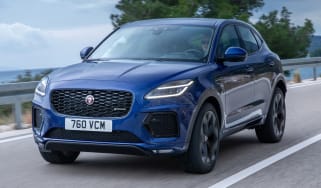 The Jaguar E-Pace has been updated with fresh new looks, while a plug-in hybrid option is offered for the first time
Electric Jaguar E-Type Zero to go into production 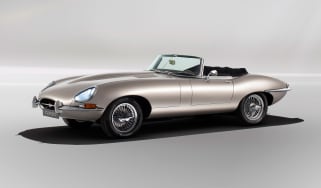 Jaguar E-Type Zero has been given the green light for production, with the electric car due next year
Jaguar E-Pace range boosted by new AI tech and engine 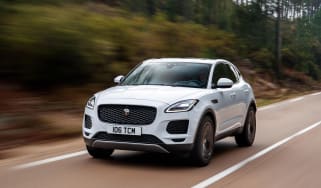 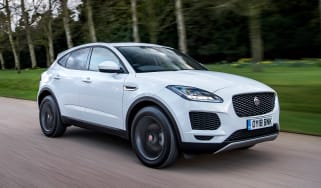 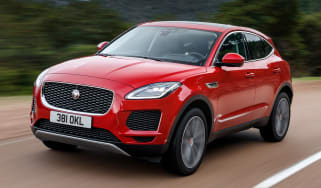 The Jaguar E-Pace SUV could become the brand's biggest seller, but will customers be better off with the D240 or D180?
Jaguar E-Pace HSE review 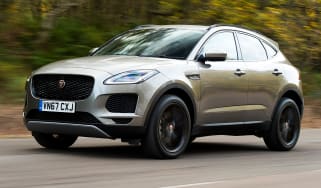 The F-Pace has been a sales hit for Jaguar, so can the more affordable E-Pace do the same? We find out
Jaguar E-Pace launches itself in London with world record barrel roll jump 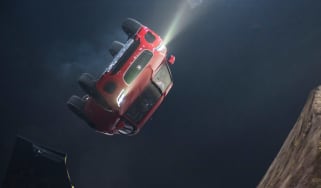 Jaguar has taken the 'launch' of its E-Pace literally, performing a 15.3-metre airborne barrel roll for a new world record. Watch the video.
Skip to HeaderSkip to Content