The Jaguar E-Pace SUV could become the brand's biggest seller, but will customers be better off with the D240 or D180? 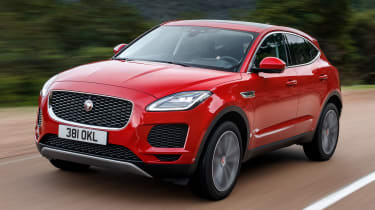 The Jaguar E-Pace jumps right in at the sharp end of the small premium SUV sector with real confidence. The simple nature of the interior won’t wow everyone who sits in it, but once you’re settled in behind the wheel, this is an excellent SUV to drive - it’s fairly practical too. The 240D diesel powertrain is flexible and a great performer, but it’s pricey, and the cheaper, more economical 180D will be a better choice for most customers.

2018 is a big year for Jaguar on two fronts. This summer, the firm’s first all-electric car will arrive in showrooms in the form of the I-Pace but before that Jag is launching what could become its biggest selling model – its new mid-sized E-Pace SUV.

Jaguar bosses are keen to stress that the newest member of the Jaguar line-up is not simply a scaled down F-Pace. To that end, design boss Ian Callum has injected design cues from the F-Type sports car rather than moulding the looks of the firm’s larger SUV into a smaller package.

It’s a car we’ve already driven and one that has impressed in D180 form, using Jaguar Land Rover’s trusty 2.0-litre Ingenium diesel unit. The D240 model driven here is that engine in a higher state of tune with an additional turbo yielding a substantial power boost to 237bhp. 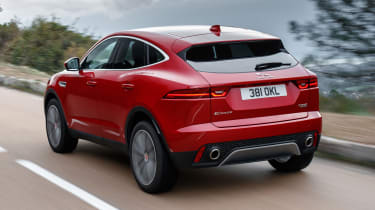 With 500Nm on tap, this model has the most torque of any E-Pace and delivers impressive performance, with 0-62mph taking 7.4 seconds from standstill. That rich baseline of torque makes the D240 feel stronger when overtaking, although with the nine-speed automatic gearbox in its default Comfort setting, it doesn’t kick down quite as swiftly as you’d like. Nevertheless it’s a smooth gearbox and nine speeds doesn’t feel like overkill.

The E-Pace D240 is reasonably refined at cruising speeds too – the wind noise and tyre roar produced by the 20-inch wheels on our test car are much more noticeable. Inevitably, dipping the throttle coaxes a classic diesel grunt out of the unit, but by-and-large it’s civilised.

It’s fun to drive as well. Jaguar’s engineers have created a real sense of difference between this and the Range Rover Evoque – a car the E-Pace shares plenty of components with. The steering is accurate and weighted nicely, and it’s easy to build confidence from behind the wheel. Torque vectoring is provided at the rear axle through Jaguar’s Active Driveline system, and you can sense it in action in sharp bends, sending torque quickly to the outside rear wheel to tighten the line. It isn’t faultless though, and will still understeer readily if pushed too hard.

Though it would be easy to see the E-Pace as a more dynamic, less practical sibling for the Evoque, it still boasts adequate space for four adults - five at a push - in a cabin crammed with cubbyholes. The storage bin sat between the driver and front passenger is huge for instance, while the 577-litre boot is generous too, larger than that in its Land Rover badged brother. The interior itself feels upmarket and well finished, though maybe it’s a little plain compared to a BMW X2. 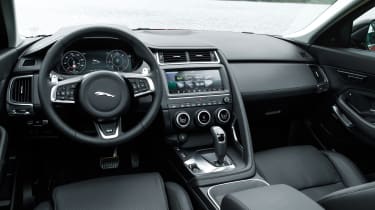 With the E-Pace S trim level we tested positioned one rung above the entry-level car, the level of standard equipment doesn’t quite showcase the car to the fullest. A powered tailgate, adaptive cruise control, autonomous emergency braking and blind spot assist are on the options list, but they come as standard if you make one step further up the ladder to SE trim. The digital instrument display on our car isn’t standard fit until you get to HSE trim either. That said, the 10-inch Touch Pro touchscreen infotainment system is found in all models, though it’s missing sat nav on the entry-level car. For a premium of £2,250, sporty R-Dynamic styling is available.

There’s no doubt that the E-Pace D240 S is a strong contender, but maybe it isn’t quite as good as the E-Pace gets when value for money is brought into consideration. The D180 powertrain – nearly as capable and more economical – is more wallet friendly both on list price and on PCP. That unit in higher spec SE trim could be the sweet spot.