The F-Pace has been a sales hit for Jaguar, so can the more affordable E-Pace do the same? We find out

There’s little doubt that the E-Pace is going to be another smash hit for Jaguar. It has a great blend of agility and comfort, with decent cruising refinement and impressive practicality. It’s also fun to drive – exactly how a Jaguar should be. The E-Pace’s infotainment isn’t anywhere near as convincing, though, and the early finance numbers make an HSE version look a little pricey for its size. A cheaper edition could conceivably earn a fifth star – but for now, Jag’s baby will have to make do with a hearty recommendation instead of becoming an instant class leader.

The Jaguar F-Pace has become the fastest-selling model in the company’s history. So it’s little surprise that the British brand is keen to follow up its first SUV with another, even more affordable offering: the E-Pace. Now we’ve had our first chance to get behind the wheel of the new baby model – and on UK roads.

The E-Pace looks a very different beast from its larger brother. It’s based on the same chassis as the Range Rover Evoque, so it is basically a front-wheel-drive car adapted to a four-wheel-drive set-up, and with a transverse engine fitted.

That’s reflected in the stance, with the cabin much further forward than on the F-Pace, headlights that are more similar to those of the F-Type sports car and a much shorter bonnet. The overall profile does a good job of disguising what is a fairly lengthy overhang beyond the front wheels. 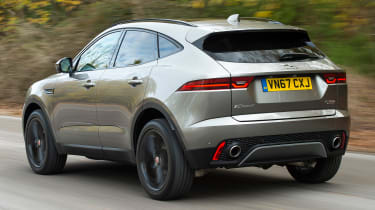 Jaguar is launching the E-Pace with a choice of Ingenium four-cylinder engines. The two petrol motors – a 247bhp unit and the 296bhp ‘P300’ model – are available only with four-wheel drive and JLR’s nine-speed automatic transmission.

Most of the diesel engines emit less than 150g/km of CO2, and the most efficient – the front-drive, manual D150, on 17-inch wheels – manages to get down to 124g/km. As with the Evoque, no six-cylinder engines are available. Nor is there any realistic prospect of a plug-in hybrid version being introduced any time soon.

There are two model ranges: regular (called ‘core’ by Jaguar insiders) and R-Dynamic, which gets body-coloured door cladding, a different front bumper design, front foglights and twin tailpipes; and then a line-up of four trim levels within each.

Entry-level editions get a heated windscreen and heated door mirrors as standard, plus 17-inch alloys, dual-zone climate control, and front and rear parking sensors and a rear-view camera. 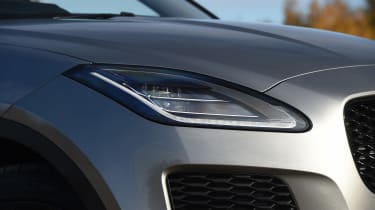 Prices are roughly in line with those of the competition, which includes the Mercedes GLA and GLC, Audi’s Q3 and the BMW X1 and X3. The cheapest E-Pace is that lean diesel, which starts at less than £29,000.

An HSE with the mid-spec diesel engine like we’re driving today is just over £42,000, while the First Edition, featuring the lower-power P250 petrol and on sale for the first year of the E-Pace’s life, manages to nudge £50,000. The last of those choices is one for ultra-keen early adopters only. Jag’s first finance figures are just coming through, but as a rough guide, the D180 HSE is a few pounds per month cheaper than a BMW X3. You’d have to step down the E-Pace range to get close to matching the monthly payments on an X1, though. The key question, really, is whether the engineers have managed to turn what is inherently a front-wheel-drive SUV into something that still feels like a Jaguar. 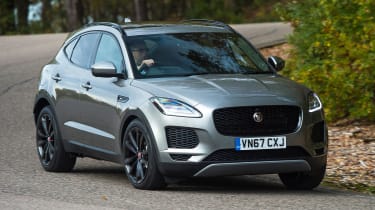 The answer is that they have. Just. This is to say that the E-Pace isn’t the last word in driver engagement or agility – but that it does deliver more of those qualities than is the norm for a small SUV.

While the Evoque has an independent front sub-frame, the E-Pace’s set-up is fixed to the chassis, and this does give the two cars a different feel. The E-Pace’s steering has that typically Jaguar springy sensation just around the straight ahead, but it weights up in a satisfying fashion and the nose is pretty quick to respond to inputs – faster, we’d say, than pretty much anything else in the new model’s class.

Crucially, it backs up this eagerness by staying impressively flat and composed, and if you need to switch direction quickly, the E-Pace won’t complain about that, either. You soon learn to have confidence in what’s going on beneath you, and it becomes quite enjoyable to thread it down a B-road – more so than it would be in, say, a Q3 or an X1.

We’re less convinced on whether the E-Pace manages to feel like a rear-wheel-drive Jaguar. Push it really hard into a corner and it just understeers, and while lifting off helps the nose to tuck back in, this doesn’t really feel like a car you can steer on the throttle.

But then, none of the E-Pace’s rivals manages this, either – and it’s hard to think of any of them that would put the same smile on your face going down your favourite country lane. Perhaps the best element of the car’s dynamic make-up is its ride quality. Our HSE example was on 20-inch wheels and standard suspension, but the E-Pace feels more compliant than it has any right to be, even at low speeds and in town, which is where many examples are bound to spend the bulk of their time. 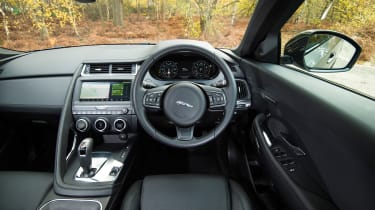 You can specify variable dampers – and you’ll need to if you step up to the optional 21-inch alloys – but the standard set-up feels to us like it offers a good enough compromise between comfort and body control.

The D180, which is expected to be the best-selling engine in the E-Pace range, produces its maximum torque of 430Nm at 1,750rpm. There’s a bit of diesel grumble as you fire it up, but it only takes a couple of minutes of running to calm down. Rev it hard thereafter and you’ll be reminded which fuel type you’re using, but in truth, there’s so much performance available between 1,750rpm and 3,000rpm that you’ll rarely need to go beyond that range.

Jaguar’s implementation of the ZF nine-speed automatic gearbox can get caught out very occasionally – if you come to a halt at a junction and want to move away again swiftly, for example – but in the most part it’s an easy transmission to get along with. 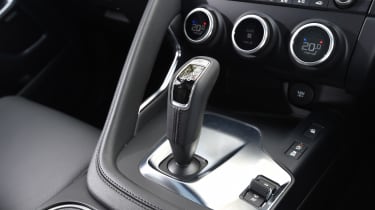 It’s worth noting, though, that you’ll need to stump up for an R-Dynamic variant if you want the gearshift paddles behind the steering wheel; ‘core’ auto models make do with the gearstick for manual mode.

At a motorway cruise the Ingenium engine is sitting happily at just below 2,000rpm, and you simply won’t hear it at that point; you’re more likely to become aware of a bit of wind rush around the side mirrors, or, more noticeably, tyre roar. This makes us think that an SE model on 19-inch rims could be an even sweeter compromise than the HSE on 20-inch wheels – on rolling refinement as well as price and value.

The cabin doesn’t do much wrong – but while there are little elements to make you smile, such as the ‘cub’ motif in the windscreen surround, you have to look pretty hard to find them. The overall effect is smart enough, with cleverly positioned stretches of double stitching and leather to make you feel like you’re in a premium product. However, there’s still the odd slab of dull black plastic, and while the chrome trim around the gearstick isn’t fake, it looks it.

Our tip? Choose your cabin treatment carefully if you want to avoid things looking a bit, well, funereal. There are plenty of trims available to offer more than one hue. 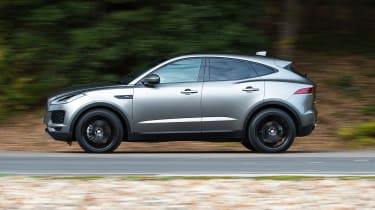 The infotainment is perhaps the E-Pace’s single biggest weak spot – as it is with most JLR products, in fact. The 10-inch widescreen display in the centre of the facia is clear enough, and Jaguar deserves credit for offering it as standard across the range. But the InControl system that it runs is a world away from the likes of BMW’s iDrive or Audi’s MMI. It’s a bit clunky to use and too slow to respond to inputs; you’ll find yourself running ahead of the system when you’re typing in a destination for the satellite navigation, for example.

There are a couple of well placed USB sockets between the front seats, but smartphone integration is via JLR’s own software – which is to say that it’s not that well integrated at all. And there’s no scope to bypass it all and just use Android Auto or Apple CarPlay, because neither of these services is offered. That’s a crime on a premium SUV when they’re standard on plenty of superminis.

The interior packaging is much harder to fault; you’ll be able to fit four hefty six-footers in there for a long journey without any problem, and the rear-seat occupants won’t complain about headroom, even if the panoramic glass roof is installed. 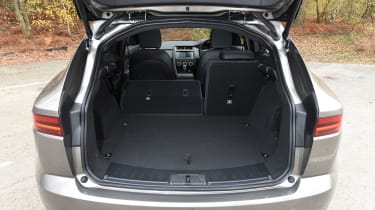 There are plenty of useful cubbyholes and deep door pockets for storage, and the central ‘bin’ between the front seats is enormous; at more than eight litres, it has enough capacity for four large water bottles.

The Jaguar’s boot is a decent size, too, at 577 litres – or more than 70 litres clear of the capacity in the BMW X1 (and more than 150 litres up on the Audi Q3’s load bay). The German offerings trump the Jag on outright load space, however; with the rear seats lowered, the E-Pace provides 1,234 litres compared with 1,550 litres for the X1 and 1,325 litres in the Q3.

As standard, you get a pair of USB sockets and four 12-volt sockets fitted, but you can sacrifice one of the 12V inputs as an option, to gain three more USB ports for rear occupants.

Other options available on the E-Pace include a hands-free tailgate that can be controlled by waving your foot below the rear bumper, a head-up display that incorporates navigation instructions and music track information, a 12.3-inch fully digital instrument panel, and a couple of high-end audio systems (one offering surround sound and 15 speakers) by specialist firm Meridian.