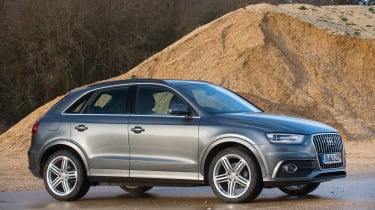 If you’re an enthusiast the Q3 won’t excite you with its typical Audi design inside and out, along with its typical Audi driving experience. But while nothing about this compact SUV is particularly inspiring, the Q3 is a car that’s easy to drive and live with. At a time of huge market uncertainty, it helps that many Q3s have a choice of zesty and efficient petrol engines, from mild to wild. But for ultimate fuel economy you need to get a 2.0-litre diesel; when we ran one we averaged 40mpg, despite it being fitted with an automatic gearbox and undertaking lots of urban driving. So while the Q3 isn’t the cheapest car to buy, the low running costs help to offset the initial expenditure.

When Audi launched the Q3 at the end of 2011, it couldn’t really fail. The Q7 and Q5 were hits with buyers, and with premium compact SUVs all the rage it was clear from the outset that the Q3 would be another success for the brand.

Offered with petrol or diesel engines and in most cases with a choice of front  or four-wheel drive and manual or automatic gearboxes, the car provided something for everyone. However, as the smallest SUV in Audi’s stable, the Q3 isn’t especially roomy inside and it’s strictly a five-seater as a result.

But with plenty of luxurious options and the availability of a super-quick, high-performance RS edition, small certainly doesn’t mean compromised. 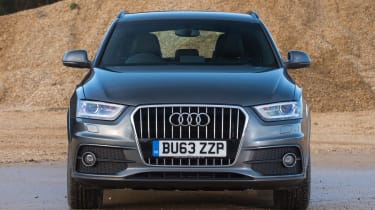 The Q3 arrived in November 2011 with a 2.0 TFSI petrol engine in 168bhp or 208bhp forms, or a 175bhp 2.0 TDI diesel. The latter two engines were offered with Audi’s S tronic dual-clutch automatic transmission.

Which one should you buy?

None of the engines or transmissions is poor, but the 1.4 TFSI has front-wheel drive and the 2.0 TDI 140/150 can be front or four-wheel drive; all other engines get quattro AWD as standard. 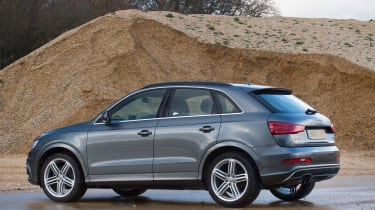 Some Q3s have more options fitted than others, so work out exactly what you’re buying. But cars without a lot of options aren’t exactly spartan; even the entry-level SE has 17-inch alloys, Bluetooth, dual-zone climate control, a 6.5-inch multimedia screen, electric windows all round, automatic lights and wipers, and rear parking sensors.

The MINI Clubman isn’t an obvious rival, but it is worth considering thanks to its efficient engines, excellent build quality and distinctive design.

A more direct alternative is the Range Rover Evoque; it’s easy to recommend because of its sharp design, although reliability can be patchy. BMW’s X1 is well made and good to drive; just try to stretch to a Mk2 from 2015, because it’s far better than the Mk1 model. Also consider the Volkswagen Tiguan. As with the Q3, it isn’t especially exciting, but it is very good at what it does. More fun is the Mazda CX-5, which also offers great value – much like the Ford Kuga.

Fuel filler release can seize, but some lubrication cures it. There’s a red plastic pull near the jack and tools if needed.

Many owners find it takes ages for the front windows to clear when it’s cold outside, regardless of heater settings.

Xenon lights can flicker; it could be a faulty connection somewhere, or a software update may be needed.

As you would expect, fit and finish inside the Q3 is excellent, along with the materials chosen. The dash is a model of clarity, plus the seats are comfy, although the interior ambience is very conservative. Rear-seat legroom is tight, but boot space is decent, at 460 litres with the back seats in place, or 1,365 litres when they’re folded. 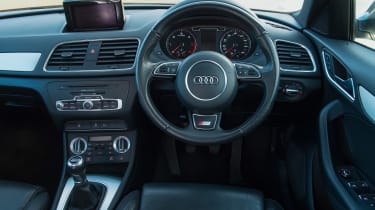 Most Q3s have variable servicing, with intervals up to two years or 19,000 miles. A fixed regime is offered, too, with a check-up every 9,000 miles or 12 months.

There have been two recalls so far. Q3s built between October 2014 and September 2016 were called back in July 2017 for a possible brake light failure.

Some Euro 5-spec 2.0 TDIs built up to 2014 were hit by the diesel emissions recall. To see whether a car is affected, visit www.audi.co.uk/owners-area/emissions/check-your-car.html and enter the reg.

Considering the Q3 was launched in 2011, 41st place in our Driver Power 2018 satisfaction survey is impressive. It came a superb 19th for its engine and gearbox, and 24th for running costs, plus 26th for interior and comfort. Safety features were disappointing; it ranked 64th here.