As the new jacked-up DS 4 Crossback enters the upmarket crossover class, we see how it fares against Audi and Volvo 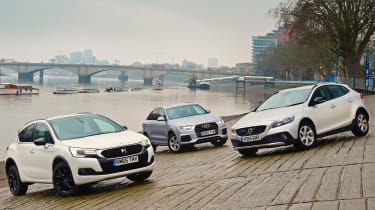 Since its split from Citroen, the newly established DS brand is gunning for a different type of customer. Citroen will go after the everyday, value-focused market, while DS now caters for those after a little more luxury - and this, the DS 4 Crossback, plays a big part in the upmarket brand's future strategy.

As crossover sales are still booming, the DS 4 hatch has been given a sharp makeover to create the Crossback. Entering this territory means it has to face some very strong competition.

Earlier this year, the newly updated Audi Q3 took on the popular Range Rover Evoque, and won, so the Crossback has a fight on its hands against even this entry-level Q3 2.0 TDI SE model.

The Volvo V40 Cross Country shares the DS 4's recipe, and with practicality and efficiency to rival the competition, also stakes a good claim for victory in this middle-ground crossover battle.

Although the DS and Volvo both boast raised ride heights and extra body protection, the Q3 is the car that conforms closest to the crossover template. 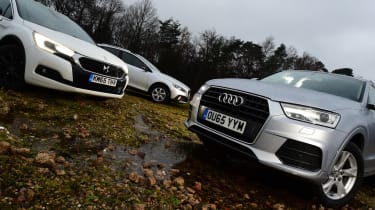 However, the Crossback and Cross Country both do enough to justify the term 'crossover', bringing something extra to the table over the standard five-doors on which they're based.

If you intend to hit even some light trails in these test cars, you might want to think twice. The DS doesn't offer four-wheel drive, and the set-up's available only on the top-spec turbo petrol Volvo.

Audi's quattro four-wheel drive is available with all engines except the 1.4 TFSI.

DS had a real opportunity to improve on the old DS 4 with this new model, by addressing annoying quirks such as the fixed rear windows. In a family five-door, this hurts usability and could be the deciding factor for many buyers. 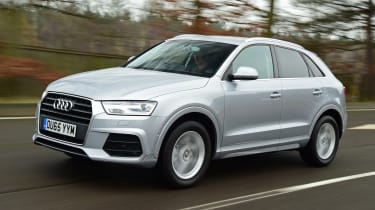 The Q3 is a proper crossover the delivers quality, performance and style, even in entry-level SE guise, so it takes victory once more. Those qualities might come at a price compared to its rivals, but we think it's worth it. While the Audi is compact, the cabin is the most spacious here, blending practicality with an impressive driving experience, and relatively low running costs.

The V40 is starting to show its age when it comes to interior design, but the V40 Cross Country's blend of safety, low CO2 emissions and effortless driving is still attractive. The composed ride and solid handling deliver lots of security, while it's versatile enough if you'll be carrying passengers and luggage. The design additions over the standard V40 set it apart just enough, too. 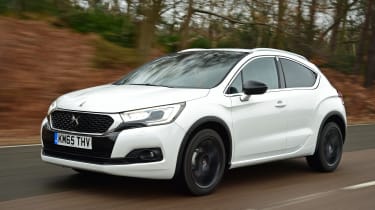 It's certainly stylish, but the DS 4 Crossback doesn't have the substance to match its looks. It might be cheaper than its rivals, but the smaller engine doesn't offer performance to match the Q3 or V40, while it's no more economical, either. Family crossovers also have to be practical, and the cramped interior, plus those annoying rear windows, are too big an issue to overlook. 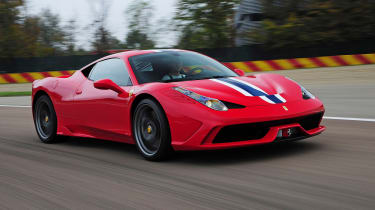 The Q30 sits slightly higher than a regular hatchback, but it still isn't a fully fledged crossover, like the Crossback. Infiniti is due to launch a proper QX30 crossover version later this year, which will be UK-built, like the Q30. 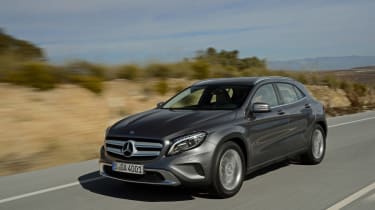 A similar budget will stretch to a used Mercedes GLA 200d in entry-level Sport trim. It should have low mileage for this price, plus it has a proper prestige badge and more power than the DS 4. A 481-litre boot gives the GLA a practical edge, too.