Our first drive of the DS 4 Crossback in the UK shows there's still work to be done, despite improvements over the standard car 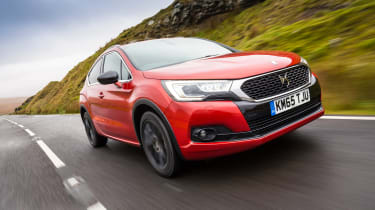 Every new car DS introduces comes one step closer to helping the brand craft its own identity. The DS 4 Crossback is the best model yet, but it shows there's still a long way to go. Rivals from Volvo and Mercedes really show how a premium hatchback crossover should be done, with issues of refinement and ride still clouding the DS 4 Crossback. The compromises are clear to see.

With DS now split from Citroen, the unloved DS 4 has been refreshed, and a new, more rugged Crossback model added to the range. We’ve now driven this more lifestyle-oriented version in the UK for the first time.

The unusual blend of hatchback, coupe and SUV styling cues sets it apart from the regular DS 4. The ride height is raised by 30mm, while roof rails have been added and the front and rear bumpers tweaked. It’s smarter than the awkward-looking original, but it carries a £1,000 premium over the standard hatchback. DS reckons it’s on to something, though, with nearly 30 per cent of premium compact hatchback sales being crossovers. It predicts one in every four DS 4 sales will be the Crossback. 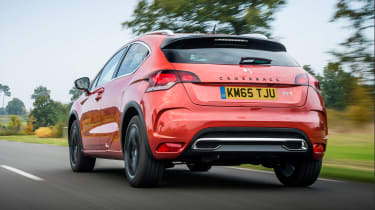 As you’d expect given its new focus, it’s been given a faux-SUV makeover and is now kitted out with darkened front and rear bumpers, wheelarch mouldings and a roof-mounted spoiler. Despite the looks you’ll fare no better at getting up a snowy side street, as the alterations are purely cosmetic – there’s no extra ability to go with the image. The rugged styling puts it in line with rivals like the Volvo V40 Cross Country, Mercedes GLA, and upcoming Infiniti QX30.

Inside, there are no real changes from the regular model, but it only comes in flagship Prestige spec, so the brand’s desire to create a premium product is emphasised by the raft of kit on offer. This includes the typical Citroen extending windscreen, sat-nav, leather and climate control. It’s just a pity there’s no real step up in material quality from the cheaper Peugeot 308, as some of the finish doesn’t come close to anything from BMW, Mercedes or Audi.

What's more frustrating is an awkward driving position for taller drivers, as despite adjustment options all-round the wheel doesn't come far enough towards you and the pedals are oddly high.  Those in the front will be happy with the space on offer, but a bigger issue is the limited access through the narrow rear doors. There’s a feeling of claustrophobia back there due to a lack of headroom, and there’s still no way of opening the rear windows. 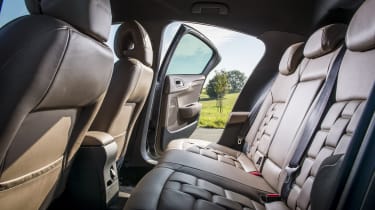 Engine options are more limited than on its regular sibling. Where the DS 4 is offered with three petrol engines and three diesels, the Crossback only comes with one 1.2-litre petrol and two diesels, 1.6-litre and 2.0-litre. Our car was powered by the entry-level 118bhp 1.6-litre BlueHDi diesel, which is likely to be the biggest seller. Fuel economy is impressive at a claimed 72.4mpg and the car emits 103g/km of CO2, yet it’s not exactly quick. There’s adequate mid-range power, but rev it out and it becomes a bit noisy and unrefined.

On the road, the combination of the elevated stance and panoramic windscreen gives you the impression of driving something far larger than you actually are. It doesn’t do quite such a convincing impression at a cruise however, thanks to a quite a bit of wind noise.

You’d expect the ride to be the biggest difference between the Crossback and the regular hatch, and it definitely is a touch softer, but not as supple as it should be given the added suspension travel. It still thumps and crashes into potholes at low speeds, and remains unsettled on anything other than smooth motorways. It certainly lacks the cosseting nature of the Mercedes GLA. Combine that with the vague steering that’s heavy at low speeds, and the slack gearshift,  and it’s not a car you’ll really relish driving.