Range of mid-life updates add to the appeal of the Volvo V40 Cross Country, but it's hard to recommend over the standard model 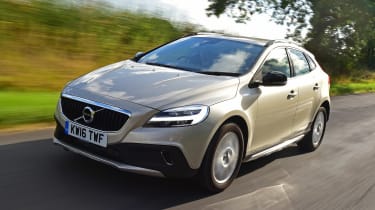 The Volvo V40 Cross Country remains good to drive and cheap to run, and it’s all the more appealing thanks to this round of mid-life updates. However, the faux-4x4 styling means it’s still more show than go, and – unless you opt for the top-spec T5 – four-wheel drive isn’t even an option. In isolation the Cross Country is a good car, but we’d stick to a standard V40 for better value for money. If you crave the off-road looks, then try one of the Volvo’s true SUV rivals.

While the standard Volvo V40 competes in a tough class – taking on rivals like the BMW 1 Series and Audi A3 – this Cross Country version is much more niche. The DS 4 Crossback is close on price, but it’s tough to pin down a direct rival for the jacked-up hatchback.

Like the car on which it’s based, the V40 Cross Country has been facelifted to match more expensive models in the range – such as the S90 saloon and XC90 SUV. It still has the outgoing model’s raised suspension, though, as well as front and side scuff plates and some more rugged-looking bumpers. Volvo has added a handful of extra standard kit including roof rails, 16-inch alloy wheels and LED headlights as well as DAB radio and auto city braking.

So it’s loaded with kit, but even after a recent facelift, the interior of the V40 is feeling very dated. The dashboard is cluttered with buttons, and while it feels well built, it’s nowhere near as modern as the one you’ll find in a Mercedes GLA. 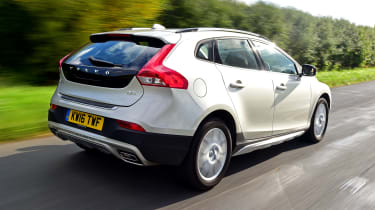 The materials are mostly soft to touch, plus there’s a metal section on the centre console that prevents the whole cabin being covered in dark grey plastic – though it still feels dark inside the V40. That makes it seem less spacious in the front as well, although there is actually plenty of room inside.

The seats are comfortable, with a well-judged driving position and plenty of support from the backrest. That’s matched by the suspension setup, which despite being raised up is still comfortable enough. While it’s not perfect over rough roads, it does ride nicely on the motorway.

There’s not too much body roll in corners either, and combined with the well-weighted steering that means the Cross Country is almost as good to drive as the standard V40. Grip is good, but for a car like this you might expect it to have four-wheel drive. That’s only available on top-spec T5 petrol models, and while it’s not really necessary in the UK, it does make you wonder why the Cross Country exists at all.

As a result, the taller suspension isn’t likely to help with any serious off-roading. You might find driving through a muddy field more bearable, or navigating a gravel track easier, but the V40 Cross Country isn’t an off-roader. 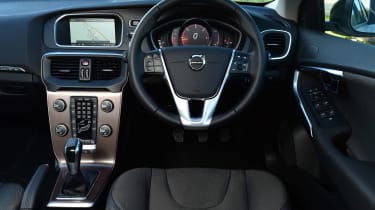 The manual gearbox has a satisfying shift, which makes changing gear enjoyable. That’s lucky, because the 2.0-litre D2 engine delivers its maximum torque of 280Nm at just 1,500rpm, so you need to change up quickly to make the most of it.

It does feel powerful, despite only having 118bhp. The 0-62mph time of 10.6 seconds seems a bit on the slow side, but on the road the Volvo has plenty of punch, while on the motorway you can just add some more throttle without changing gear, as the engine works hard from such low revs.

Plus, since it manages 76.3mpg and just 99g/km of CO2, this engine will be the top choice for most buyers. It’s not the most refined diesel at idle, with a harsh sound as you get up to speed, too, but it’s quiet enough when cruising. Wind and road noise is a slight issue at 70mph, though it’s not any worse than the standard car. 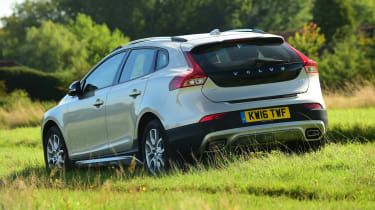 The petrol-powered Mercedes GLA 200 costs about the same as this V40, but can only manage 48.7mpg – and CO2 emissions of 134g/km are much higher. So while the GLA has more of an SUV look to it, the V40 is much more economical. However, the standard V40 with the same D2 engine returns 83.1mpg and 94g/km of CO2 – that’s quite significant when you consider that the Cross Country commands a £1,800 premium – although you do get more kit as standard.

Towing capacity will be a consideration for many V40 Cross Country buyers, and a figure of 1,500kg (braked) is decent for a car of this size. The strong torque figure means it won’t feel too strained while pulling, either.

There’s a decent amount of space in the back for passengers, although legroom is tight behind a taller driver. It’s no more spacious than a standard Volvo V40, however - and with the extra cost and slightly higher running costs, it’s hard to recommend the Cross Country over the standard car, aside from if you really love the jacked-up looks.