The new MINI Countryman is bigger and better than ever, so does it have what it takes to beat the Audi Q2 and Volvo V40 Cross Country? 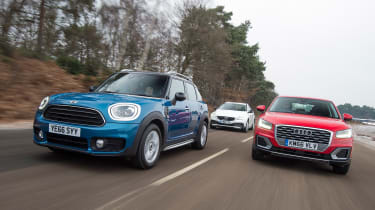 MINI claims it has repositioned its Countryman for this second-generation version, so it’s now more of a conventional crossover compared with its predecessor – a car that awkwardly straddled the line between compact off-roader and conventional hatch.

That means the Countryman has landed right in the firing line of two premium crossovers; the Audi Q2 and Volvo V40 Cross Country.

Audi plugged yet another niche in its model line-up with its Q2. The supermini-sized SUV sits underneath the larger Q3 in the range, offering the brand image you’d expect from an Audi but at more affordable prices.

While the Volvo isn’t exactly the new kid on the block, the Swedish firm has kept its higher-riding V40 Cross Country hatch fresh. Last year the car’s looks were updated, and the brand’s best-selling model in the UK inherited the XC90 SUV’s ‘Thor’s Hammer’ LED running lights. However, the Countryman sits on an all-new platform with clever tech underneath, so it has a few tricks up its sleeve to trouble its challengers.

This new second-generation MINI Countryman is launching with a range of powertrains. From front-wheel drive to four-wheel drive, efficient turbo petrols to (later this year) MINI’s first ever plug-in hybrid, the new Countryman offers plenty of choice. However, diesel is still popular in this market, so it’s the £24,425 manual Cooper D Countryman we test here.

Testers’ notes: “There’s plenty of scope for personalisation, with contrasting roof and mirror colours available. You can team this with bonnet stripes and themes, but these hike the price.”

The Audi Q2 is the brand’s first crack at the compact crossover class, and combines an upmarket image with cutting-edge kit and low running costs. There’s a wide range of engine and transmission options available, and here we test the 1.6-litre TDI in mid-spec £24,500 Sport guise – although the car in our pictures is a 1.4 TFSI.

Testers’ notes: “If you want your Q2 with a 148bhp 2.0-litre TDI diesel and two-wheel drive, you’ll have to wait. For now, this bigger unit is only available with quattro all-wheel-drive.”

Like its rivals, Volvo’s V40 Cross Country takes the firm’s regular hatchback platform and raises the ride height to give it some more rugged appeal. However, this £24,805 D2 Cross Country Nav Plus (the car in our pictures is a D4) is a two-wheel-drive model that mixes crossover looks and practicality with low running costs. A facelift last year kept the V40 looking fresh, but are its older underpinnings enough to compete against the newest offerings in the sector?

Testers’ notes: “Four-wheel drive is available on the Volvo, but not with diesel power; only the expensive and not-so-efficient T5 petrol auto. Even then, the V40’s ability on the rough stuff is limited.”

The rugged MINI finally delivers on the rough-edged promise of its predecessor. The ungainly looks won’t be to all tastes, but it’s the most refined, practical and fun-to-drive model here, plus it leads the way for quality. There’s also loads of personalisation options, including a number of family-friendly upgrades. The fact it delivers the most performance per pound is the icing on the cake.

There’s no denying that Audi’s Q2 oozes showroom appeal. It looks great, features a slickly designed interior and gets all the essential kit. It’s also backed by the best residuals and delivers decent practicality. However, the firm ride undermines the driving experience, while the quality isn’t up to the usual Audi standards. It also looks expensive in this company.

The V40 is the priciest choice for cash buyers and finance customers, plus the least practical. Volvo’s infotainment system also looks old hat next to the Countryman and Q2’s more modern set-ups, so it finishes last here. Visual updates have kept it looking fresh, and while it’s comfy, refined and cheap to run for business users, it doesn’t cover all the bases as effectively as its rivals.

The CX-3 beat the Q2 when we tested them along with the Mercedes GLA late last year, and although it trails the MINI on power, it’s much cheaper, while offering a similarly sophisticated experience. It’s not as spacious, but is more efficient, with lots of standard kit.

For similar money to the MINI, you could have a 2013 Range Rover Evoque in Pure trim with 45,000 miles on the clock. The older 2.2 diesel is a bit noisy, but has plenty of power, and it offers practicality and style to match the MINI.