The new Countryman is the biggest MINI yet, but is it an improvement over the car it replaces?

Make your own mind up about the looks, but the new MINI Countryman is improved in every other area. It’s bigger, more practical, more grown-up to drive and more luxurious, and while that means the price increases it also makes this MINI feel like a genuine mini-SUV. This Cooper S model isn’t cheap and does little to excite on the road, though, so we’d recommend saving some cash and opting for a standard Cooper or Cooper D.

While car buyers lapped up the previous MINI Countryman, hardcore enthusiasts saw it as another chance to have a dig at the reborn British icon. They claimed its sheer bulk and cost were totally at odds with MINI’s history of building small, light and low-cost city cars - though in a world where the SUV is distinctly on-trend, few could criticise it as a logical business decision.

Those enthusiasts are unlikely to be won over by the new model, either, as it’s the biggest and one of the most expensive models the brand has ever produced. This won’t worry MINI too much, though, as it’s likely to sell by the bucketload. In fact, the previous Countryman remains one of the company’s strongest sellers – so there was little rush to replace it. 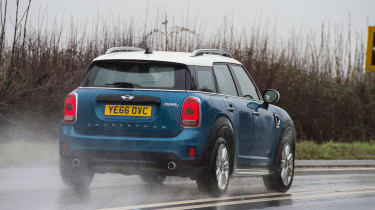 Still, the march of progress brings along this second-generation car, which finally adopts the UKL2 platform found underneath cars like the Clubman estate and BMW X1. The new architecture means the Countryman is 200mm longer and 30mm wider than the old one – making it larger than a Mazda CX-3 and significantly bigger than a Nissan Juke.

The extra girth is immediately apparent from the outside, as is MINI’s efforts to create a more rugged SUV look with squared off haunches, a long bonnet and chunky surfaces. You can decide for yourself whether the changes are a success – but to our eyes, it looks more awkward than the outgoing car, particularly the bulbous rear-end with its longer overhang. At least MINI doesn’t charge extra for roof rails, which the designers claim are necessary to resolve the slightly muddled styling.

The exterior may be a bit ‘love-it-or-hate-it’, but even the biggest MINI detractor can’t ignore the improvements inside. Quality has taken a significant step forward from the old car, with plusher materials, neatly styled switchgear and a general air of solidity only bettered by the Audi Q2 at this price point. 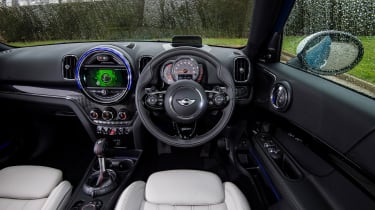 The optional lighting package fitted to our test car adds multi-coloured ambient LED strobes everywhere – even inlayed into the gloss black dashboard panel. MINI is also debuting its new flagship 8.8-inch sat-nav and infotainment system on the Countryman, which brings a touchscreen display, crisper graphics and new tech like a built-in SIM card for real-time traffic data. It’s a £950 option over the standard 6.5-inch sat-nav system and is really intuitive to use – though we’re glad MINI has retained the rotary controller by the handbrake.

Practicality is greatly improved, too.  There’s significantly more knee room for rear seat passengers, while even tall adults have plenty of headroom. The seats also slide and recline to let owners juggle bootspace and interior space. The boot itself is 100 litres bigger than before (and 70 litres bigger than a VW Golf), with neat options like a smart electric tailgate and a fold-out picnic cushion underneath the boot floor.

The new platform also brings the Countryman’s chassis and engines right up to date with the rest of MINI’s range. It launches in the UK with the same turbo petrol and diesel engines found in the Clubman, although the only variant available for us to try on the launch was the range-topping Cooper S with the ALL4 all-wheel drive system and an eight-speed automatic gearbox. We’ll be testing the more popular Cooper D in the coming weeks. 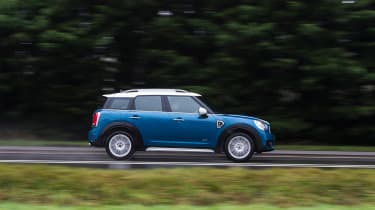 If the Cooper S nameplate leads you to expect a fast and engaging drive, then you’ll be a little disappointed. Its 2.0-litre turbocharged petrol engine is as smooth and willing to rev as it is in the hatch, yet with a modest 189bhp on tap it’s doesn’t feel particularly brisk. It also sounds a lot racier than it is, especially in Sport mode, which allows some contrived pops and bangs from the exhaust. Take it out of Sport, though, and the Cooper S is a decent cruiser, with the autobox swapping cogs quickly and smoothly. General refinement is also better than before, with a pleasing absence of wind and road noise.

As with the powertrain, the driving experience as a whole majors on maturity. The ride is still on the firm side around town, with large potholes making themselves felt, but it smoothes out the faster you go and becomes deftly controlled on the motorway.

However, there’s still some MINI DNA evident on twisty roads. The steering, like the Clubman, is less darty than in the hatch, but it’s weighty and accurate, while the Countryman feels smaller and more agile on the road than its dimensions would suggest. Body roll is only noticeable when pushing hard, too. In fast driving during wet conditions, the all-wheel drive system does provide additional security, although the extra cost and efficiency penalty (the front-wheel drive model produces 9g/km less CO2) means it’s difficult to justify for many buyers.

Despite this, we don’t expect the relatively thirsty Cooper S ALL4 to be the pick of the range. Neither does MINI, as more buyers are expected to plump for a Cooper or Cooper D, and our experience of those engines in a similarly sized Clubman leads us to believe those will be the ones to buy. At over £28,000 before you even trouble the extensive options list, this MINI also carries a hefty price tag.