Final report: low-tech infotainment has failed to dim the appeal of the Volvo V40 hatch 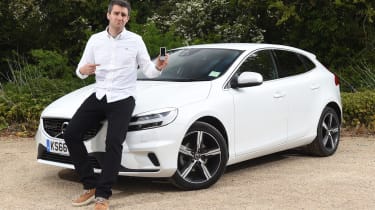 Despite its age, the V40 is a still a highly accomplished premium hatch and a worthy alternative to more mainstream rivals. More modern Volvos feel much more hi-tech, though. Our car’s flaws are offset by the impressive refinement, superb fuel economy and involving drive.

Our time with the Volvo V40 is at an end, and after just over 6,000 miles and countless slogs across the country, it’s time  to bid a fond farewell to our facelifted Swede.

Some cars pass through the Auto Express office without a huge fanfare, and the baby Volvo did fall into this category during its time here. But in reality, the V40 has been a refreshing take on mainstream motoring, and after six months we’ve discovered there’s lots to like about the Audi A3 rival.

In fact, there are plenty of things the hatchback does brilliantly, and the exceptional fuel economy has made it one of the biggest money savers on our fleet.

In a previous report, we subjected the Volvo to a challenging 60-mile ‘hypermile marathon’ and managed to eke out a staggering 74.6mpg. 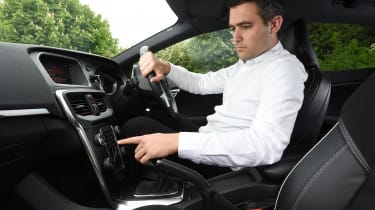 Its 94g/km CO2 emissions meant it was free to park outside my south-west London home, too, and while it isn’t the fastest car from 0-60mph (it takes 9.9 seconds), the strong 2.0-litre diesel engine has no trouble keeping up with faster moving vehicles on the motorway.

It’s also really well built. In 2015 the Volvo XC90 took overall honours in our annual Car of the Year awards, and in 2017 we named the smaller XC60 our favourite Premium SUV. Although those cars feature newer cabins and more innovative, lightweight materials, the ageing V40 can still challenge the class best for its quality, fit and finish.

One area where it can’t compete, however, is when it comes to interior design. The complicated dashboard feels years behind the most intuitive infotainment set-up you’ll find in the latest Volkswagen Golf, and even a BMW 1 Series beats the Volvo’s fiddly layout with its easy-to-use iDrive system. In fact, the V40’s button-biased centre console reminds us of an old mobile phone. In a world of touchscreen Samsungs and sleek iPhones, it all feels a bit old-fashioned, and the seven-inch colour display isn’t exactly laden with functionality. 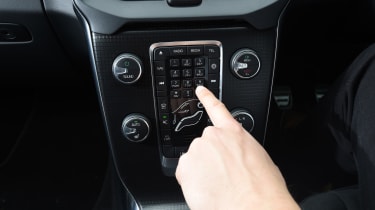 Many of the Volvo’s more modern rivals come with Apple CarPlay and Android Auto as standard, which makes connecting your smartphone a simple and painless affair. No such luck on our V40. Even operating the climate control is a tricky and needlessly annoying process, requiring extra steps if you want to operate the temperature and airflow on the passenger side.

But our car’s long kit list has offset most of these ailments. The heated seats and automatic lights were as useful in winter as the ice-cold air-conditioning and tinted rear windows have proved in the warmer months. The LED lights are excellent, while the 17-inch R-Design alloy wheels and pearlescent paint give the car a distinctive and desirable look.

It may be due for replacement in the next couple of years, but over its time with us the smallest car in Volvo’s ever-expanding line-up has shown it’s still an interesting alternative to the best models in this class. 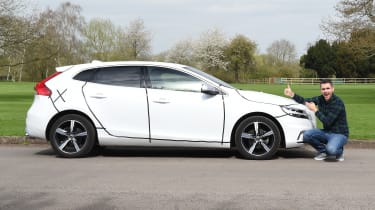 Posh hatch is proving an efficiency star, so we tape it up to see if we can match official mpg claims

Hybrid technology means cars are getting more and more economical. Opt for a plug-in or electric vehicle and, providing you can keep it charged up, you’ll spend mere pennies on fuel.

But what if you cover big miles and need the dependability of a car with a combustion engine? Due to some recent bad press, is a dirty diesel out of the question, or does it still make sense for slogging up and down the motorway on a daily basis?

Five months in and our V40 is proving there’s life left in diesel yet. On a full tank the trip readout indicates a whopping 700-mile range, and as the miles pile on the car is becoming increasingly economical, too. 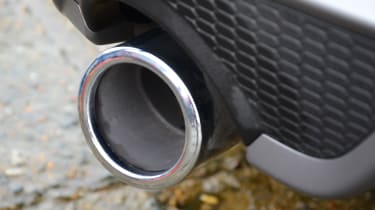 In fact, as we passed 4,000 miles, our V40 – despite its R-Design trinkets and sporty bodykit – has been posting similar numbers to the Toyota Prius on our fleet (Page 52). There’s no sportier driving mode, granted, but no BMW-style eco-PRO button, either.

The long gearing and comparatively large 2.0-litre diesel (most rivals use a 1.6) mean we’re seeing over 50mpg – even throwing heavy London traffic into the mix. On a recent trip to Warwickshire, setting the cruise control at 70mph for 100 miles saw more than 60mpg from our super-frugal D2 model. Even loaded up with luggage and friends, the Volvo clocked an impressive 51mpg. But it almost doesn’t matter how you drive it. Yes, a heavy right foot will see fuel economy dip, but by less than you might expect. Even in a hurry, our V40 ticks along without issue, sipping diesel with the hesitation of a human drinking a hot cup of tea. 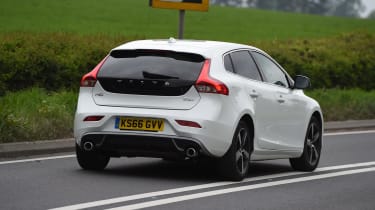 Which got us thinking, how close to the V40’s claimed 83.1mpg could we get? Few cars match their manufacturer’s publicised figures, but if any were to come close, the Volvo was in with a good chance. To give it a go we devised a 60-mile round trip from my home in southwest London, down the M3 to Sandhurst in Berkshire. It’s a challenging route of urban and motorway driving, with a revealing stretch of average speed cameras that should give the Volvo a chance of smashing its previous personal best.

Starting from cold didn’t help, but by feathering the throttle and managing our braking, we quickly saw the trip reading over 60mpg. By the time we left the motorway we were nudging 70mpg, and as we got back to London that evening the V40 had posted a scarcely believable 74.6mpg. Impressive, regardless of the favourable conditions.

With lots of miles ahead, we’re looking forward to some thrifty summer motoring. Even in its old age, the Volvo remains one of the most efficient premium hatches on sale. 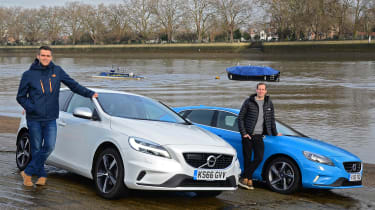 Sometimes a manufacturer goes right back to the drawing board when it facelifts a car; other times the updates are far more subtle. Volvo has gone for the latter approach with its revised V40, so when I was thrown the keys to the latest addition to our test fleet – a D2 R-Design, the best-selling model in the V40 range, in Crystal White – I had to show my mate Ed. After all, only 12 months ago he took the plunge and bought himself a very similar pre-facelift version.

I was keen to get the cars side by side to highlight the changes Volvo has made, and it was easy to distinguish any differences with the two hatches being exactly the same spec. 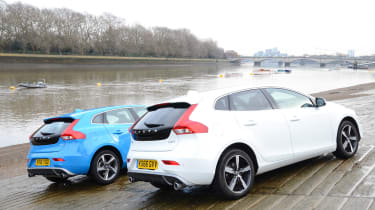 Just minutes after we parked the Volvos together, Ed and I were hurriedly pointing out what we liked and didn’t like about each other’s cars. It was clear that there was plenty to compare and contrast.

It’s from the front that the differences are most obvious. The old car’s halogen headlamps have made way for the ‘Thor’s Hammer’ daytime running lights – now a Volvo signature – giving a fresher look.

The only other detectable change is the new Volvo corporate badge, which ditches the blue accents for a classier black and chrome finish. Round the back there are even fewer discernable differences. Both cars feature a contrasting black bootlid, as well as the R-Design’s neat chrome exhaust tips. Our car gets a new-for-2017 R-Design logo next to the D2 badge, while I specified tinted glass for the side and rear windows, at £300. 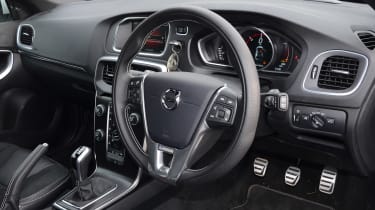 Inside, the changes are subtle. This is a shame, because while quality is excellent, the complicated dash design trails rivals from Audi and BMW. The button-heavy centre console takes some getting used to, while it’s not easy to familiarise yourself with the complicated climate control set-up.

It’s also a disappointment that the V40 isn’t available with Apple CarPlay or Android Auto. Still, pairing your phone is easy and our car’s kit count is generous nonetheless.

As I’ll be covering quite a few miles in the smallest Volvo, I’ve added some luxuries. All cars get LED lights, DAB and Bluetooth, but I also went for the Winter Plus pack (£875), which includes heated seats, automatic wipers and a heated front screen, as well as Active Bending Headlights. The Intellisafe Pro pack (£1,900) adds advanced safety kit.

Elsewhere, comfort and refinement are excellent, and body roll is kept in check. Our D2 isn’t as peppy as Ed’s T3 petrol, but after just 2,800 miles I’m seeing at least 10mpg more out of the diesel, averaging 46.5mpg.