We drive the Volvo V40 Polestar with the Performance Pack to see if it adds an extra edge to the hot hatch? 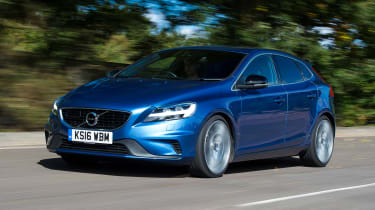 If you’re an existing Volvo V40 owner after a bit of added oomph, then the individual Polestar parts could be just the ticket. The power increase is marginal, however, and the suspension is firm, while the sports exhaust is muted by the hatchback’s already refined character. Adding the pack to the list price of the already expensive T5 puts the ageing hatch in sight of far faster premium rivals, too.

Before sporty sub-brand Polestar reveals its first standalone model, it will continue to offer performance parts for existing Volvos. The firm’s latest efforts focus on the ageing V40, and attempt to inject some late-life appeal ahead of the hatchback’s demise next year.

The V40 has always been a decent car to drive, with accurate steering and tight body control. The Polestar Performance Pack builds on a solid base, then, by adding a variety of bespoke parts to Volvo’s competent Audi A3 rival.

Available for D4 diesel and T5 turbo petrol models, the Polestar pack costs a not insignificant £4,725 to buy outright. For that you get what Volvo calls ‘optimised’ ECU software, new lightweight 19-inch wheels, an intake and exhaust upgrade, tweaks to the springs and dampers, and some subtle styling add-ons. Most of the parts are available separately as well as for existing cars, but tag them together on a new T5 and you’ll gain an extra 8bhp (now 250bhp) and 50Nm of torque (up to 400Nm). 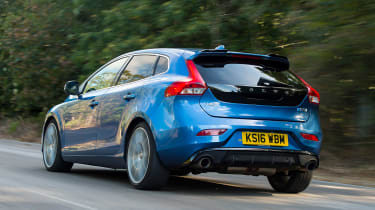 On our R-Design Pro test car, which in T5 guise is only available with Volvo’s eight-speed automatic gearbox, the upgrades lift the car’s list price to an eye-watering £37,110. That’s more expensive that any current front-wheel drive hot hatch, and puts it within spitting distance of four-wheel drive rivals like the Mercedes-AMG A 45.

On the road, the first thing you’ll notice is the ride. The new springs are 10mm lower and significantly stiffer than Volvo’s regular Sport Chassis setup. When mated to the larger wheels, that makes make the V40 quite unforgiving. The car is jittery at low speeds, with a tendency to seek out ruts and gutters in the tarmac. But on smoother roads and at higher revs, things feel more controlled. Plant the throttle from a standstill and you’ll have to wrestle the wheel to prevent a degree of torque steer, though the slick gearbox swaps ratios imperceptibly.

With the windows raised you’ll wonder whether that new exhaust is functioning properly, though. The V40 has always been a refined cruiser, and apart from a bit more tyre roar, the Polestar extras do little to change that. From the outside, however, the tweaked hatchback growls menacingly, with far more purpose than the standard car. Unfortunately, there are no configurable drive modes and there’s no way of turning up the noise, either. Given its motorsport heritage, we’d like a little more drama in the driving experience. 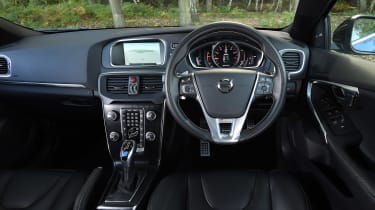 And with only 250bhp, it’s significantly short on firepower. It picks up speed effectively but never appears that fast. A Volkswagen Golf GTI with the desirable Performance Pack has an almost identical output (242bhp), feels quicker, and costs just £31,505 when equipped with the maker’s excellent DSG auto box. The ballistic Ford Focus RS boasts 345bhp and undercuts the Volvo by almost £5,000.

But despite its age, the V40 is still a good-looking car – only enhanced by Polestar’s discreet styling additions. The lowered suspension gives it a meaningful stance, while the bigger wheels and small spoilers combine to make the small Volvo an attractive package. Inside, small blue Polestar badges complete the look.

The latest Volvo S90 and XC60 only highlight the cramped interior and faltering infotainment system, however. There’s no Apple CarPlay or Android Auto, and the tiny five-inch display is fiddly to operate. Every V40 – Polestar-equipped or not – comes with two-zone climate control, full LED headlights and autonomous emergency braking.