Audi has facelifted its classy A3, and we test the five-door Sportback against the fresh Volvo V40 and capable VW Golf in a posh hatch fight 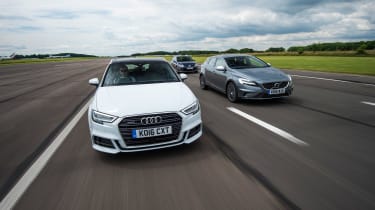 The current Audi A3 marked a new era for the VW Group at launch in 2012. It was the first car to use the new MQB chassis, while Audi injected it with a premium feel and sporty drive that have become familiar from the brand.

Now the A3 has been given a mid-life facelift with an enhanced look, new kit and more efficient engines. However, it isn’t the only updated premium hatch to be launched this year, as there’s a revised V40 on the block as well. As with the A3 it was originally introduced in 2012, and it maintained Volvo’s reputation for building safe and stylish models. Its range of efficient diesels meant it was popular with fleets, too. 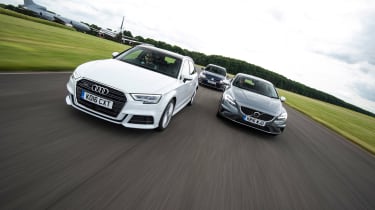 The update gives it a sharper nose inspired by that of the XC90 SUV, while the engine line-up promises to deliver even greater efficiency without sacrificing performance. To see how these two newcomers fare, we’re testing them against a fresh version of the evergreen Volkswagen Golf. The R-Line Edition offers the sporty looks of the GTI and R models, but comes with a range of more sensible engines.

We’re rating 2.0-litre diesel versions of all three cars here, so performance is similar, which means our newcomers will need to impress in other ways if they’re going to come out on top. 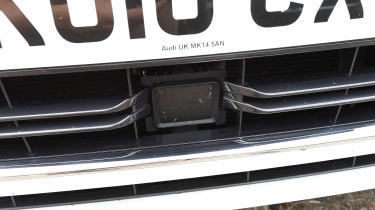 The V40 and Golf have standard-fit autonomous city braking, but the radar-based system is a £475 upgrade on the A3. This also incorporates adaptive cruise control, which is standard on the Golf, yet you have to spend £1,900 on Intellisafe Pro to add it to the V40. The pack also brings lane and blind-spot detection, auto main beam and traffic sign recognition.

With its best-on-test 99g/km CO2 emissions, the V40 is the cheapest company car choice. Even if you swap our cars manual box for an auto, the Volvo undercuts both manual rivals here, while adding Quattro 4WD sees the A3’s emissions jump from 109g/km to 126g/km. 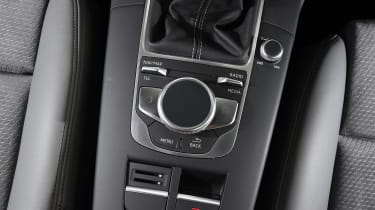 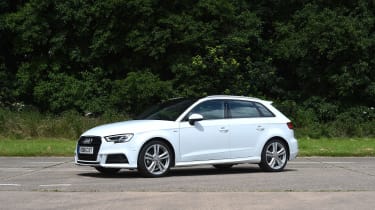 It’s a subtle update of a proven formula, but the new A3 Sportback does enough to come out on top in this test. It has a premium feel that its rivals can’t quite match, while S-line trim now delivers a great mix of sporty handling and comfort that its predecessor struggled with. If you’re buying on finance, the extra monthly outlay over the Volvo is well worth investing in. 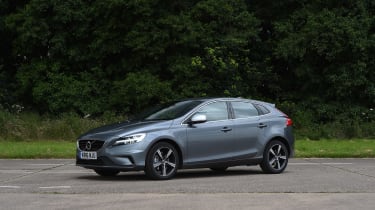 Low emissions place the V40 ahead of the VW here, but the update doesn’t quite go far enough for it to overcome the Audi. From behind the wheel little indicates you’re in the new car, while R-Design trim delivers a firm ride that isn’t backed up by a sporty drive. The Volvo is still a great alternative choice, especially for business users, but it does feel a little old in this company. 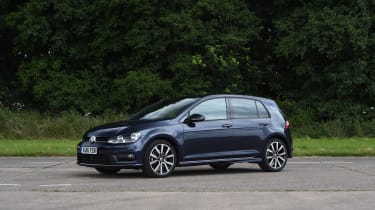 Third place seems a bit harsh on the Golf, as in a lot of respects it’s still a great family car that delivers an upmarket experience. However, in R-Line trim it doesn’t make as much sense as its rivals here; it doesn’t quite have the same sporty appeal. There are some key bits of kit missing, too, while the lower-spec GT model is nearly as well equipped and £1,000 less. 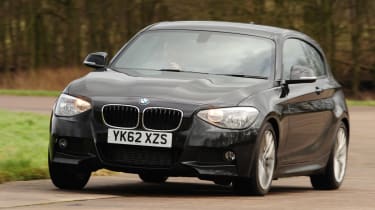 The class’s handling benchmark is still the rear-drive 1 Series, and the 118d M Sport has just enough power to make the most of its chassis. If your budget is tight, the three-cylinder 116d isn’t far behind and running costs are lower for £1,145 less. 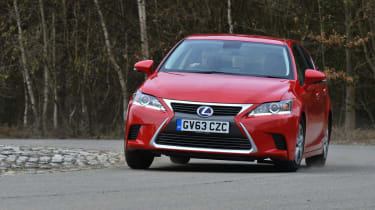 Petrol hybrid power is the way to go for the lowest company car costs, but while the Lexus is a fleet leader, there’s little fun to be had, even in the racy F Sport. Still, it emits just 94g/km of CO2, and official 68.9mph economy is in the ballpark of this trio.