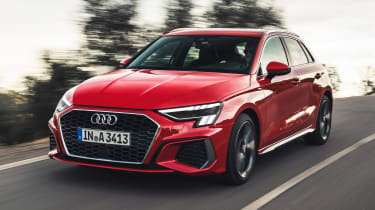 The A3 has been refined rather than reinvented. It has shed its conservative image for a more daring design, which is backed up by a great interior and plenty of technology. Good levels of equipment and a broader range of engines give buyers more choice than before, while a refined driving experience keeps up its premium brand credentials.

The Audi A3 is a staple of the premium hatchback segment, racking up more than 600,000 sales in the UK since its arrival in 1997. These days it faces stiff competition from the BMW 1 Series and Mercedes A-Class, not to mention rivalry from within the Volkswagen Group in the form of the Golf.

Now into its fourth generation, the A3 benefits from a more striking exterior design, with greater differentiation between trims, right down to the style of the lighting. The three-door A3 hatchback is no more, leaving the five-door Sportback and yet-to-be-revealed four-door A3 Saloon in the range. In time you’ll be able to choose your new A3 with almost any kind of engine, because petrol and diesel versions will be joined by a 48-volt mild hybrid and, further down the line, a plug-in hybrid that’s likely to offer around 37 miles of electric range.

The A3 is built on an evolution of the MQB platform that underpins a range of models within the VW Group, such as the Skoda Octavia and Golf. For the A3 this time around some of its proportions have changed, with a wider track and an increase in overall width and length. The tweaks bring with them more headroom and legroom for passengers front and rear, although there is no increase in boot capacity in comparison with the outgoing A3. It remains at 380 litres, expanding to 1,200 litres with the rear seat backs folded. 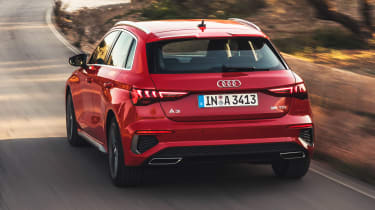 When you sit in the driver’s seat, you’re greeted by a very different cabin design to past A3 models. There’s a real cockpit feel to it, with a 10.25-inch digital instrument cluster fitted as standard (a larger 12.3-inch version is available as an option) and air vents placed high on either side.

A 10.1-inch infotainment touchscreen is included too, and is angled towards the driver. Models with the S tronic automatic gearbox get a stubby toggle switch in place of the usual gear selector, freeing up more space on the centre console.

The A3 35 TFSI we’re driving here uses a 148bhp 1.5-litre turbo petrol engine, and cylinder-on-demand tech allows it to run on two cylinders when cruising to reduce fuel consumption. New for this generation A3 is a mild-hybrid version that takes fuel saving one step further, courtesy of its 48-volt electrical system. This provides engine-off coasting for short periods, uses uprated hardware to restart the engine more smoothly and harvests energy when slowing down. However, we found the brake pedal to be short on feel when compared with A3s without the technology. Think of it as a stepping stone to the full-on plug-in hybrid e-tron model that’s in the pipeline.

On the move, the A3 is composed and it delivers the kind of smooth drive you’d expect from a premium product such as this. Even without quattro four-wheel drive, there’s plenty of grip and composure in faster corners, helped by the multi-link rear suspension design. 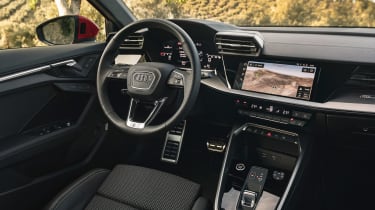 The optional Progressive Steering set-up requires fewer turns at low speeds, and drivers can alter its feel through different drive modes. We tried models with the adaptive suspension, which has been further improved over previous versions, and found the comfort levels to be pretty good. Nonetheless, the standard suspension set-up will meet the needs of most people, so the adaptive system is no longer an essential option.

A 35 TDI diesel model will also be offered at launch, powered by an improved 148bhp 2.0-litre turbo four-cylinder engine and mated to a seven-speed S tronic auto with front-wheel drive, followed up by an all-wheel-drive quattro option later. It delivers power smoothly and more quietly than its predecessor, thanks in part to the addition of a sound-insulating windscreen. It also feels punchier than the petrol car, courtesy of its 360Nm of torque.

However, if you’re in the market for something more frugal again, then it’s worth waiting for the 114bhp 30 TDI, which will offer better economy and lower emissions without a big drop in overall driveability. Early pricing makes the new Audi A3 costlier than its nearest rivals, but the quality and design could be enough to win buyers over